Yinsen was a brilliant doctor who was kidnapped by the Ten Rings, a terrorist organization under the leadership of the Mandarian, who forced him to save Tony Stark's life so he could build missiles for them. Yinsen assisted Stark in creating his first suit of armor to escape, and willingly sacrificed himself so Tony could live. Stark would take Yinsen's advice to heart, becoming a superhero to protect the world from threats. With his sacrificing act saving the life of Tony, Yinsen would, indirectly, end up saving the universe with Tony's own sacrifice.

He was portrayed by Shaun Toub, who also played Iroh in The Last Airbender.

Ho Yinsen was born in Afghanistan in a small village in Gulmira, and at an unknown point in time, Yinsen would marry and have a child with her. He would later go on to become a student at the University of Cambridge in England, and graduated from the university as an accomplish engineer and physician. Becoming a doctor, Yinsen started to work in Europe, where he became known for his skills that he could attend the Bern 2000 in Switzerland. There, he met Tony Stark and his colleague Maya Hansen, and attempted to introduce the two to his associate Dr. Wu. Tony brushed him off due to being intoxicated, leaving Yinsen disappointed, but hoping that he would meet Stark again.

Around 2008-2009, Yinsen was kidnapped by the terrorist organization, the Ten Rings in Afghanistan, which presumably resulted in the deaths of his wife and child. During his captivity, Yinsen was ordered by the Ten Rings to save the life of Stark, who was critically injured by shrapnel from one of his weapons when the organization captured him. He managed to remove much of the shrapnel he could, and had to build a electromagnetic piece to place in his chest to prevent a piece of shrapnel from getting to his heart. Once Stark was awake, Yinsen informed him of his current predicament, and also told Tony that the Ten Rings wanted him for something.

Yinsen and Stark were ordered by the Ten Rings to build them Jericho missiles if they wanted to live, but Yinsen managed to convince Tony that they would kill them regardless if they build the weapons. With this and determination to escape, Tony and Yinsen decided to create a suit of armor to fight against the Ten Rings, using the parts they were given to build it. While building the armor, Yinsen was able to prevent Ten Rings commander Raza from learning about it, and also spoke to Tony that his weapons were his legacy, and that he could change that. During their escape, the Ten Rings learned of their plans, and Yinsen decided to buy Stark time by picking up a weapon and shooting at the terrorist.

Yinsen was mortally wounded, but was able to give Tony his parting words of advice to not waste his life before passing.

Due to Yinsen's sacrifice, Tony was able to escape from the Ten Rings and return to the United States, where he decided to end his company's weapon production. Yinsen's death was avenged by the true mastermind behind Tony's capture, Obadiah Stane, who murdered Raza and his colleagues to collect Tony's armor from Afghanistan. Once Stark dealt with Stane, he decided to take Yinsen's last words to heart, becoming a superhero under the moniker "Iron Man", and protect the world from threats.

Yinsen giving his last advice to Tony, moments before his passing. 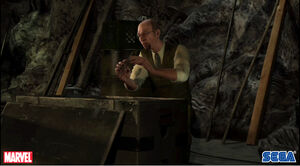 Yinsen (seen on Iron Man's side at the bottom) in concept art for The Avengers.