Servant of a Villain, Dwarf

Hoggle is the deuteragonist of the 1986 film Labyrinth and the first ally Sarah meets. He is a cowardly dwarf supposed to be working for the Goblin King, Jareth, however he is befriended by Sarah. Due to his fear of Jareth, Hoggle is torn between helping Sarah and his loyalty to the king.

Jareth forces Hoggle to give Sarah a peach that would make her forget about her baby half-brother Toby. In the end, Hoggle finally stands up to Jareth and proves his bravery by saving Sarah, Ludo and Sir Didymus from a giant mechanical goblin.

He is performed by Shari Weiser and voiced by Jim Henson's son Brian Henson.

A running gag throughout the movie is that no one, not even Jareth, can get Hoggle's name right. 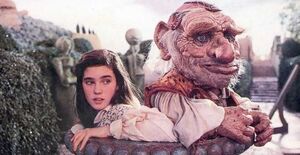 Hoggle and Jareth.
Add a photo to this gallery

Retrieved from "https://hero.fandom.com/wiki/Hoggle?oldid=2312417"
Community content is available under CC-BY-SA unless otherwise noted.