Heroes Wiki
Register
Don't have an account?
Sign In
Advertisement
in: Articles under construction, Article stubs, Animals,
and 12 more

Hogsqueal is a hobgoblin and a supporting character in The Spiderwick Chronicles, making his first appearance in The Seeing Stone.

Jared Grace first meets Hogsqueal in the goblins' camp and reluctantly frees him from a cage. The hobgoblin spits in Jared's eyes, giving him the Sight, which means he can see the Faerie world without the aid of the seeing stone. He may not be trustworthy, but he does prove himself a special ally to the Grace children.

Like all other Hobgoblins, Hogsqueal could give Humans the Sight by spitting them in the eyes. 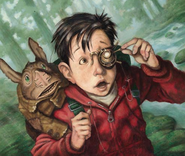 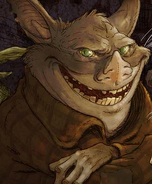 Hogsqueal in the film adaptation