NOTE: This article is about the incarnation of Hogun from the Marvel Cinematic film series. The mainstream version can be found here: Hogun.

Member of the Warriors Three

Hogun is from the species of the Vanir, and together, with Fandral, and Volstagg, they form the Warriors Three, Asgard's bravest warriors. Hogun and his friends assisted Thor in stopping Loki, the Frost Giants and the Dark Elves, but were later killed by Hela during her attempted conquest on the Nine Realms.

He was portrayed by Tadanobu Asano.

Unlike the other Warriors and group of Thor's friends, Hogun was a Vanir who spent much of his time on Asgard and became an official member in their race.

Hogun was one of the Asgardians to appear at Thor's coronation. However, it was ruined when a group of Frost Giants attempted to steal the Casket of Ancient Winters. When the Warriors Three and Sif found Thor talking with his brother, Loki, they were convinced by Thor to travel to Jotunheim by using the Bifrost summoned by Heimdall. On the icy planet, they confronted Laufey, who sent Frost Giants when Thor refused to leave. However, Odin intervened but stripped Thor of his powers until he was deemed worthy. As the friends argued, Loki revealed he had the guard alert Odin to Fandral, the Warriors, and Sif before he left. After the God of Mischief left, Hogun suspected that Loki had something against Thor but Fandral refused to believe it.

After Loki refused to lift Thor's banishment, the Warriors and Sif grew more and more desperate to have his friend back. One evening, Sif and Hogun stopped an argument between Fandral and Volstagg, where they decided to go to Earth to rescue Thor after Heimdall purposefully left his post. The Warriors Three and Sif used the Bifrost to get to Midgard, where they were reunited with Thor and acquainted with his human friends, Jane Foster, Darcy Lewis and Erik Selvig. As they convinced Thor his brother was behind the deception so far, when Loki sent the Destroyer to kill the group, Hogun, the Warriors, Sif and Jane Foster and her team helped evacuate the citizens of the city and witnessed Thor face the Destroyer and regain his full power.

The Warriors and Sif, along with Thor, returned to Asgard after Heimdall, before he succumbed to unconsciousness, had summoned the Bifrost to bring them back home. Thor told Sif and the Warriors to get Heimdall to the infirmary when he confronted Loki. After the Bifrost is destroyed, Hogun went to a celebration with the return of Thor with his wife and children. However, Thor left in the middle of the feast, still grieving for his lost brother.

In the final attempt to bring peace to the Nine Realms since the Bifrost was repaired, Hogun returned to his home world of Vanaheim, where he and his friends defeated the invaders, beginning with the defeat of the Kronan Marauder. Thor offered for Hogun to remain behind with his people and Hogun accepted the gesture deciding to join them.

He later witnessed the Convergence, during which, this time, Thor killed the leader of the Dark Elves, Malekith.

By this time, Hogun returned to Asgard. After Hela broke out of her prison due to Odin's interference, she announced her conquest, starting with her homeworld of Asgard. Hogun attempted to scare her off, not knowing Hela's identity as Odin's daughter. It caused her to go on a murderous rampage, killing all the Einherjar and wounding Hogun. However, Hela ultimately killed him when he refused to follow her.

Hogun was later avenged along with his fellow Warriors when Surtur was unleashed upon Asgard and killed Hela. 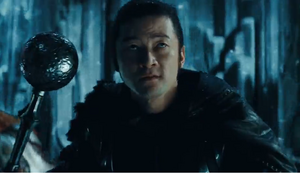 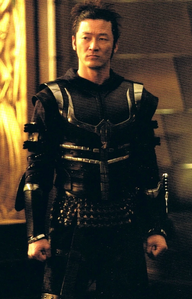