Along with Finn McMissile, she is another British secret agent and Mater's girlfriend. She is voiced by Emily Mortimer.

Holley is happy, serious and focused in her missions.

Holley is a young British desk agent turned spy-in-training who is stationed in Tokyo. Well-educated and sharp, she knows every trick in the book (or rather, she relies on every trick in the spy manual). She is armed with all of the latest state-of-the-art spy equipment imaginable, from hidden cameras and concealed weapons to a telescoping utility arm and a holographic pop-up display. Holley is a highly motivated agent, but is fresh out of the academy, so her experience is based on lessons learned in school rather than real-life situations. When Finn McMissile requires Holley's technical expertise for his latest top-secret field operation, she finds herself pursuing a rendezvous with the most unlikely candidate—Mater, an innocent tow truck caught up in the intrigue, who is mesmerized by the beauty of his newest friend.

At the end at the movie, she says she is Mater's girlfriend and says to Mater that he still owes her a first date. 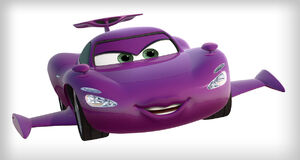 Holly is ready to fly!

Finn and Holley in Radiator Springs

Retrieved from "https://hero.fandom.com/wiki/Holley_Shiftwell?oldid=1707115"
Community content is available under CC-BY-SA unless otherwise noted.