Return to her homeland in Yoitsu (formerly), Be with Lawrence

Holo is the main female protagonist of the light novel and anime series Spice and Wolf. She is a wolf harvest deity that was bound to the town of Pasloe, ensuring a bountiful harvest for the residents. As the villagers became more self-reliant with time, however, Holo was neglected and, feeling unneeded, skipped town with the traveling merchant, named Kraft Lawrence, by 'jumping' from the villagers' wheat to Lawrence's wheat in his wagon. She longs to return to Yoitsu, her snowy homeland, and makes a contract with Lawrence to accompany her there.

Holo is perhaps best described in her own words:

In her human form, Holo appears as a young girl with long orange/brown hair and red eyes, although she still retains her wolf ears and tail, which appear remarkably like those of a fox. Due to her trademark ears and tail, Holo often has to wear baggy and thick clothing that hides her unusual features from people, which she dislikes as she adores her tail. Holo's 'true' form is a giant brownish golden wolf. In her wolf form, her eyes stay red , but her sclera turn yellow, and her fur is the same color as her hair in human form, and she is much larger than normal wolves. In her wolf form she is able to talk normally, and is capable of reaching unimaginable speeds. After forming a contract with Lawrence, Holo wears clothes and a simple hood she found in Lawrence's wagon.

Holo is often shown to be flirtatious and manipulative with Lawrence. Throughout the series, she often mocks Lawrence's manhood by calling him a child, and questioning his negotiating skills. However, Holo is very soft on the inside and has a really deep fear of being alone, even considering loneliness to be no better than death. Thus, she could be considered a tsundere. Although she jokes about her affections for Lawrence at first, she slowly falls in love with him. She is also very wise, hence her title 'Holo the Wise Wolf', and her wisdom often comes in handy during merchant trades.

Holo is a bit of an alcoholic, often drinking when having the chance to do so and usually getting drunk because of it. She is also somewhat of a glutton. She often convinces Lawrence (usually using her feminine charm) in buying her food which is usually in large quantities and at time expensive. This might just be because she is really a massive wolf and needs the appropriate amount of nutrition. A perfect example of this was when she buying over 80 apples with Lawrence's money without his permission (which is the beginning of a large and growing debt with Lawrence).

Despite her wisdom, Holo knows very little about human society. Part of this is due to the fact that she has gone centuries without interacting with humans, which has made her very out of touch with the times. She completely lacks Lawrence's near-encyclopaedic knowledge of the world, which often results in him giving her lectures on how things work. Nevertheless, Holo does know other things about humans, particularly about how they live. Indeed, she often understands people better than they understand themselves, and isn't above emotional manipulation when it suits her. She is carefree about certain human conventions, but not because she doesn't understand them- she just doesn't care. All in all, Holo is a very proud "wolf" but does understand that she does not know everything, An example of this is when Lawrence explains why people get sick via the four humours.

Though she is a deity, Holo still suffers from the same faults as many humans do, For one Holo does experience jealousy toward other girls who talk to Lawrence, This is not shown better than with her and Lawrence meeting the lovely shepherd girl Nora Arendt. Holo was against hiring Nora as a bodyguard not only because they didn't really need one but also for the fact that Nora and Lawrence became close very quickly. Given that shepherds are enemies of wolves is factored in to Holo's initial dislike for Nora. Holo also hates being worshipped as a goddess, particularly since it seems nobody needs her any longer, though if pressed she'll admit however reluctantly she does technically fit the requirements.

Holo also snores in her sleep, but whenever Lawrence brings it up, she denies it, likely out of pride.

Holo is a wolf deity and because of this she has several supernatural abilities. 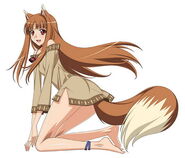 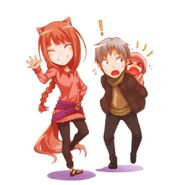 Retrieved from "https://hero.fandom.com/wiki/Holo?oldid=1727679"
Community content is available under CC-BY-SA unless otherwise noted.