Depending on each Episode
Escape to Alaska with his family (formerly; succeeded), later save his family and Springfield from Russ Cargill (succeeded) (The Simpsons Movie)

Homer Jay Simpson, temporarily known as Max Power, is the father of the Simpson family and the main protagonist of the long-running series in primetime animated, The Simpsons. He is an overweight, lazy and ignorant man, but is strongly devoted to his wife and children. Despite this and its below average, which has shown moments of great intellect, intelligence and can be a loving father and husband at times. Homer works as a safety inspector low level in Springfield Nuclear Power Plant, in Sector 7-G, although it is often incompetent and mostly sleeps in the service and donuts provided are eating. He spends much of his time at Moe's Tavern with his lifelong friends Barney, Carl, Lenny, and bartender Moe. At home, often sitting on the couch watching TV while mindlessly eating food and drink Duff. Homer is the only son of Abe and Mona.

Over the past years, Homer has been regarded as a cartoon icon and a staple of American comedy.

His appearance is that of a overweight balding man. He has a perpetual shadow five-o-clock that can regenerate itself at a very fast pace, if he shaves. Despite their overweight status, and hate exercise, which at times has shown surprising physical prowess and agility for a man of his stature, as when training for Whacking Day and hitting several pop-up snakes with kicks and even backflipping. His baldness is a contribution of several factors. Discovering when Marge was pregnant, he would extract a substantial amount of his hair. Another contribution is working on nuclear power for so many years that exposure to radioactivity has caused most of his hair to fall out. In one episode, he learned that if he repented of all their sins and became Catholic, I could go to heaven when he died. During his confession, he claims to have masturbated eight billion times and he has no plans to stop and he does not regret it. Excessive masturbation can lead to hair loss as well. He wears a white polo shirt, blue pants, and grey shoes.

Homer's personality is one of frequent stupidity, dimwit-ness, selfishness, laziness, and explosive anger; one might say it is that of the "Average Joe". He also suffers from a short attention span which complements his intense but short-lived passion for hobbies, enterprises and various causes.

Homer is prone to emotional outbursts; he gets very envious of his neighbors, the Flanders family, and is easily enraged at his son, Bart, and strangles him in an exaggerated manner. His trademark phrase to strangling Bart, "Why you little...!" and on one occasion, "Why you little bastard!". He also spanks Bart sometimes and, in one case, Lisa. One time, he was too busy to spank them, so he told them to go to their rooms and spank themselves. He shows no compunction about this, and does not attempt to hide his actions from people outside the family, even showing disregard for his son's well being in other ways, such as leaving Bart alone at a port, or allowing Bart to go court for skateboarding naked on his dare when all he would have to do is attend a 1 hour parenting class signifying not only his disregard for Bart but his extreme laziness.

While Homer has repeatedly upset people and caused all sorts of mayhem in Springfield, these events are usually caused by either his explosive temper or lack of foresight. Except for expressing annoyance at Ned Flanders, Homer's actions are usually unintentional. Most of his explosive anger is targeted on Bart, because of something stupid he had said or done. Despite their disadvantages, these common outbursts saved Homer from dying of a pent-up rage-induced heart attack.

While Homer's stupid antics often upset his family, he has also performed acts that reveal him to be a surprisingly loving father and husband, such as selling his cherished ride on the Duff Blimp and using the money to enter Lisa in a beauty pageant so she could feel better about herself, giving up his chance at wealth to allow Maggie to keep a cherished teddy bear; spearheading an attempt to dig Bart out after he had fallen down a well, even though he hates doing physical labor and arranging a surprise second wedding with Marge to make up for their lousy first ceremony, even going so far as to hire one of The Doobie Brothers as part of the wedding band and getting a divorce from Marge, essentially making their second wedding a "real" one.

Despite his hatred of manual labour, Homer does a surprising amount of DIY work around his home. He built a jungle gym, a costume of Florida for Lisa, a birdhouse and spice-rack for Marge however these are shabby at best and two of them actually fell apart. He also remodelled his kitchen when Marge felt insecure about hers after meeting the neighbour's deluxe one however this was more because he felt emasculated when Marge tried to phone a contractor.

Homer tends to derive amusement from the misfortune of others. He is a chronic thief and borderline kleptomaniac which ranges from petty to grand theft, stealing everything from TV trays to power tools and air conditioners, even an entire room of the Flanders House from Ned Flanders. He has also stolen golf balls from the local driving range, office supplies (including computers) from work, and beer mugs from Moe's Tavern.

Homer has a vacuous mind, but he is still able to retain a great amount of knowledge about very specific subjects. He often shows short bursts of astonishing insight, memory, creativity and fluency with many languages! Homer is also extremely confident; no matter how little skill or knowledge he has about anything he tries to do, he has no doubt that he will be successful. However, his brief periods of intelligence are overshadowed by much longer and more consistent periods of ignorance, forgetfulness and stupidity. Homer has a low IQ due to many factors: his hereditary "Simpson Gene", his alcohol problem, exposure to radioactive waste, repetitive cranial trauma, and the crayon lodged in the frontal lobe of his brain. He also implied that he would have been at least a bit smarter and more athletic, if not by a substantial amount, if his father had tried to give him encouragement rather than beat him down. The crayon in his brain is possibly the largest causal factor in his stupidity. It is also implied Homer repeated second grade, most probably due to the Simpson Gene kicking in at that time plus the crayon lodged in his brain.

Homer's intelligence was said to jump up fifty points when he had the crayon removed, bringing him to an IQ of 105, slightly above that of an average person (though he showed far above average intelligence), but he went back to his old self when he had it reinserted, presumably lowering his IQ back down to its original 55. This IQ score is, however, likely a joke or oversight on the producers' part, as someone with an IQ of 55 would be unable to look after themselves and would be classified as severely mentally handicapped. Also from the level of intelligence he showed it's much more likely that his IQ was boasted to 135-155. Despite his handicap, Homer does have a degree of long term, calculated planning of what might happen, such as when, shortly before taking his "forget-me-shot" from Moe Szyslak, requested for their anniversary party to have a Moon Jump, due to realizing exactly what will happen afterwards.

Homer has at times debated against his brain. Occasionally, a specific body part such as his face, stomach or liver is also shown debating with his brain. In one notable scene Homer's mind actually leaves his body out of boredom, causing him to collapse. Homer is also inclined to retreat into fantasy, such as daydreaming of Germany as "the land of chocolate".

Homer's attitudes toward women, romance, and sex are occasionally shown. While Homer's marriage with Marge is occasionally strained, it seems generally happy. Despite this, Homer is often tempted with other women, and usually shows no qualms with gawking at (and drooling over) attractive women. Homer almost had an affair with Mindy Simmons, but ended up not wanting to. He has made the occasional remark denoting his attraction to other women (including his neighbor's wife), even in front of Marge on an occasion, but always shows his devotion to Marge in the end.

In earlier seasons such as season 1, Homer's personality was different. Homer was an angry, grumpy, ignorant man who got embarrassed by his family (instead of the other way around) but generally loved them. He also was prone to angry outbursts, such as yelling at Bart and Lisa, strangling Bart (which has continued in later seasons), and giving Krusty the Clown the middle finger in court after Homer had assumed it was him who robbed the Kwik-E-Mart.

Homer has since developed into a less intelligent nicer person in later seasons. Homer's "angry personality" still sometimes surfaces up, usually whenever Bart makes him mad.

Homer's strength often varies for comedic purposes, though he is portrayed as being considerably strong, able to lift a motorbike above his head, and use it as a sword effortlessly.

Homer has repeatedly survived things that could easily kill other people. His well padded stomach allowed him to survive direct cannon fire to the stomach with no immediate injuries, though later it was found that repeated fire had destroyed his stomach which could have killed him.

During the fight between him & Peter Griffin in the episode "The Simpsons Day", he revived himself after being crushed to death within several moments.

Homer is a talented fighter, fighting with great prowess in his duel with Peter Griffin.

In addition to being able to accomplish what no man of his health and standing could, Homer has been able to accomplish things that defy all logic and reason whatsoever, such as causing cornflakes and milk to burst into flames and cause a nuclear meltdown in a testing van, despite no fissionable materials being present in it at the time. 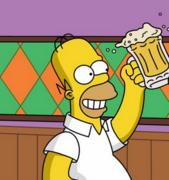 Homer being punished by an angry mob for polluting the lake, thus causing Springfield to be domed
Untitled-00:53:38.jpg
Homer refusing to go back to Springfield 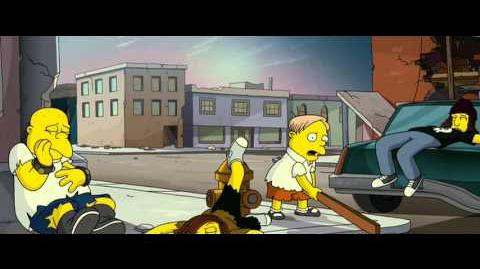 Retrieved from "https://hero.fandom.com/wiki/Homer_Simpson?oldid=809201"
Community content is available under CC-BY-SA unless otherwise noted.