???
The Honey Queen is a minor character in Super Mario Galaxy series. She is the queen of bee who helps Mario on certain missions.

Honey Queen (referred as Queen Bee in this game) first appears in Super Mario Galaxy where she is a non-playable character. She rules over the Honeyhive Galaxy and helps Mario out in missions there. She first appears in the mission Bee Mario Takes Flight on the Queen Bee Planet where she tells Mario that she is plagued by a terrible itchiness and asks him to stop it.

She appears in Mairo kart 7 as a new racer.

Honey Queen appears in Super Smash Bros. Ultimate as a master spirit in World of Light. Her spirit battle is a timed battle against a giant Pikachu on the mario galaxy stage. 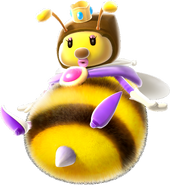