Honey the Cat is the protagonist of the video game Sonic the Fighters as well as been a supporting heroines of the Archie's Comics Sonic the Hedgehog. She is a young female cat who is helps Sonic and his friends on their adventures.

Honey is an anthropomorphic cat about a meter tall. She has close-lying orange-yellow fur, a peach muzzle, and long black hair that she keeps in two voluminous ponytails. She also two triangular and perked ears with peach inner ears, a small black nose, large sharp black eyes, thin arms and legs, and a slim tail.

Honey's attire is very detailed. She wears a red hairband and elaborate white and laced cloth-like hair barrettes around her ponytails, along with a red dress with poufy shoulders, black straps on the cuffs, a black collar, a pair of white wings on the back, and white laces on the lower rim. Her dress also has black outlines around the waist and shoulders, and a black area on her front skirt with white fasteners. Additionally, she wears white gloves with red backs and laced cuffs, black arm wrappers around her wrists and pointy black and red high-heeled boots.

Honey is shy, kind and empathetic girl, Been based on Candy from Fighting Vipers, She shires her shyness and passive personality around the kids and everyone but also has the same like, as been a good opponent and singer, She is also described as a woman with great kindness. 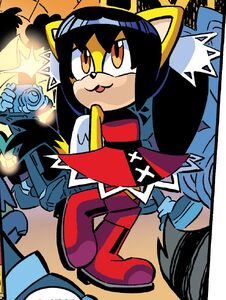 Honey the Cat, from Sonic the Hedgehog #268. 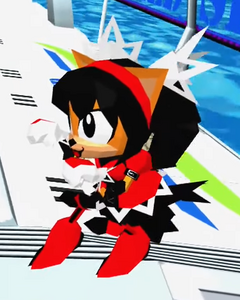 Honey the Cat in Sonic the Fighters 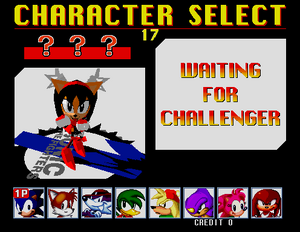