Control of Chinese martial arts "Qi" (the ability to see and discern the shapes of energies and auras within the body)
Mastery of Tai Chi Chuan
Gardening
Spell Cards:

Hong Meiling is a heroine from the Touhou Project series who works and lives at the Scarlet Devil Mansion as its personal gatekeeper, guarding its entrance alongside her followers. She is a youkai, although it isn't currently known which category she belongs to. She is known for her mastery of martial arts, part of which can be seen from her movement which is performed with Shin-Kyaku (a move in Chinese martial arts).

In Touhou Hisoutensoku, Meiling spotted a wandering giant and imagined it to be the Chinese god of disasters, the Taisui Xingjun, going off to battle it and its henchmen despite not knowing the danger she was in.

Meiling appears as a tall, busty girl with teal eyes and long, straight, scarlet hair with two braids tied in black ribbons. She wears an olive green cap with a bronze star with the Chinese character 龍 (Lóng, lit. Dragon) in the middle. She wears a decorated olive Chinese dress with a white blouse underneath, and has a black ribbon tied on the collar of her blouse. 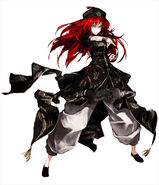 Hong Meiling figure (Touhou)
Add a photo to this gallery 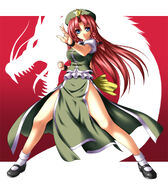 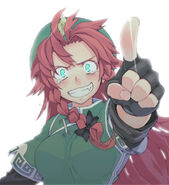 Retrieved from "https://hero.fandom.com/wiki/Hong_Meiling?oldid=1791609"
Community content is available under CC-BY-SA unless otherwise noted.