Heroes Wiki
Register
Don't have an account?
Sign In
Advertisement
in: Elementals, Dragons, How to Train Your Dragon Heroes,
and 18 more

Elemental Dragon
Hookfang is one of the two tritagonists (alongside Snotlout) of the How to Train Your Dragon franchise. He is the male Monstrous Nightmare of Snotlout.

Even though he and Snotlout seem very cold and harsh towards one another, with Snotlout often trying too hard to enforce his authority and Hookfang sometimes ignoring Snotlout's commands, they care deeply about one another, as they were both willing to sacrifice their lives for one another. Both have shown to be proud, reckless, slightly selfish, incredibly stubborn, don't respect authority and pick fights for the heck of it. Much like Snotlout always teases some of the other teens, (Mostly Hiccup and Fishlegs) Hookfang is shown to pick up fights with other dragons, such as Toothless, Barf and Belch, and Stormfly.

Like his rider, he is somewhat of a bully and highly aggressive. He even shown to be mostly mischievous as he enjoys biting his rider or use his fire on him to get back on as his amusement that he even teases him during flight as diving full speed to scare his owner. 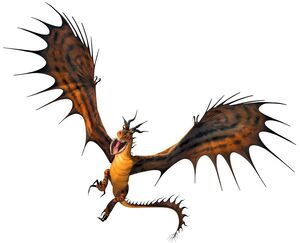