Heroes Wiki
Register
Don't have an account?
Sign In
Advertisement
in: Articles under construction, Article stubs, Mythology,
and 15 more

Horus is a prominent figure in Egyptian Mythology, generally perceived as a loving and protective figure as well as archrival of Set, his uncle and God of Deserts, Storms, Disorder, Violence, and Foreigners. His name means "he who is above" and "he who is distant".

Horus was the Ancient Egyptian god of the sky, protection, and kingship. In earlier myths, Horus was depicted as the son of the sky goddess Nut and the earth god Geb and the brother of Osiris, Isis, Set and Nephthys whereas in later myths, he is Osiris and Isis's son, Set and Nephthys' nephew, Nut and Geb's grandson and Anubis' cousin. He was born shortly after his father departed to the Duat (Ancient Egypt's underworld) after being killed by Set.

Throughout his youth at the marshland of the Nile, the same place where Isis raised him and hid him from Set, poisonous snakes, scorpions, crocodiles, and other wild animals, Horus learned means to ward off the dangers and getting stronger so as to match the might of his father's killer.

Upon reaching adulthood, Horus set out to avenge his father's death and engage Set in combat, culminating in him defeating the latter at the cost of one of his eyes, a price that worth to claim his rightful inheritance, the throne of Egypt. After giving up his injured eye to Osiris, he compensates such loss by wearing the Double Crown of Egypt (a crown with hooded cobra on it). As such crown symbolizes light and royalty as well as possessing the ability to see and know all in addition of protecting the wearer from harm, it became the inspiration for the Pharaos to wear the crown of same model. 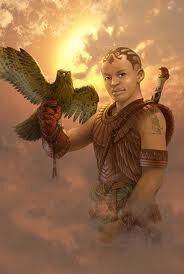 Horus in The Kane Chronicles 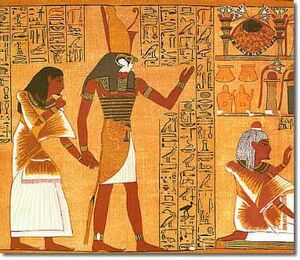 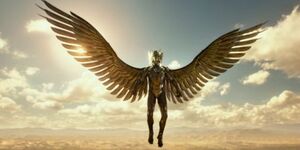 Horus in Gods of Egypt 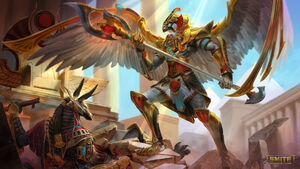 Other aspects of Horus