Hot Dog is a fire dog in Skylanders: Giants.

He is voiced by Carlos Alazraqui who also voiced Fiesta, Rocko from Rocko's Modern Life and many others.

This cutie-wutie little puppy was born in the belly of the Popcorn Volcano, then spat out when the volcano erupted. Luckily for Hot Dog, he crash-landed safely on a tent in a nearby camp. But it was unlucky for the Skylander, Gill Grunt, who was fast asleep inside at the time. To make up for burning Gill Grunt's tent down, Hot Dog helped the Skylanders complete the mission Master Eon had sent them on. Using his amazing sense of smell, he led them to the end of their quest, and when a lava monster started threatening his new friends, Hot Dog demonstrated just how useful he can be in a scrap!

Brave, loyal, and able to scratch his ears with his hind legs, Hot Dog is a valuable member of the Skylanders, even if he does keep trying to bury Chop Chop when no one's looking. 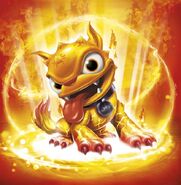