Ability to speak in both of his vehicle and robot modes.
Temporal Freeze

Hot Rod is a one of the two tritagonists (alongside Izabella) of Transformers: The Last Knight. He is an Autobot warrior who had fought alongside Bumblebee as his brother-in-arms.

He is voiced by Omar Sy, who also portrayed Bishop in X-Men: Days of Future Past and Barry Sembène in Jurassic World.

Hot Rod is an arrogant Autobot and Bumblebee's brother-in-arms and partner. He has a French accent, in which he really hates it. He loves the 2017 Lamborghini Centenario LP770-4 as his new vehicle mode.

Hot Rod was an Autobot warrior who had long been on Earth, having fought for the allied forces along with Bumblebee in World War II. He also somehow acquired a French accent that he did not know how to get rid of. Years later, he was a close ally of Edmund Burton, as well as the father of Oxford University professor Viviane Wembly, who tasked him with protecting his daughter. Viviane was in reality the last living descendant of the ancient Merlin, and thus the only one able to wield his Cybertronian staff.

He spent years disguised as her car, a Citroen DS, and developed a strong fondness for her. One day, Burton tracked him down and told him the time to recruit Viviane to fulfill her destiny had come. The next day, as she prepared to leave for work, Hot Rod sprang into action, locking her in and racing through the London streets. When she broke his window in an attempt to escape, he broke cover, begging her to stop. With his true nature revealed, she grew more frantic in her escape, wondering aloud if he was "one of the famous ones". He grew angrier as she continued to try and escape, and on the way, he scanned and upgraded into a new vehicle mode; the 2017 Lamborghini Centenario LP770-4.

He arrived with her at Burton's castle, mere seconds after the arrival of Cade Yeager and his brother-in-arms, Bumblebee. He transformed and attempted to calm the frantic Viviane, who he thought was being very difficult. After things had calmed down a bit, he formally introduced himself to Viviane, though she found understanding his accent very hard. He once again bemoaned his inability to get rid of the hated accent. When the Transformers Reaction Force tracked them down, he used his special time bubble gun to slow them down in order to cover their escape. They made their way to London and when they found themselves pursued by the authorities, in which Hot Rod volunteered to lead them away so the others could continue their search for the Staff.

He later made his way to Stonehenge and joined with the other Autobots, humans and Guardian Knights. The returned Optimus Prime rallied them all to save Earth from Quintessa and Megatron's plan to drain Unicron, who resided within the planet, of energy to restore the recently arrived Cybertron. En-route to Cybertron, he and the other Autobots were not impressed by the intimidating Guardian Knights. As the battle began, he shared an orbital assault carrier with Crosshairs as they took on the airborne Decepticons. They were eventually shot down by Infernocons but survived and joined Optimus' charge on the ignition chamber. He was very happy to see Vivian had returned rather than flee with the TRF. As battle raged in the unstable chamber, he used his time gun to freeze Megatron, Saving Hounds life.

Quintessa and Megatron were quickly defeated and his beloved Viviane retrieved the Staff. As the control center fell to Earth, he managed to save Viviane and Cade from falling to their deaths by freezing them with his gun, buying them just enough time to be grabbed and flown to safety by Optimus. He and the other Autobots managed to survive the crash of the control center and soon bid farewell to the humans as they boarded their ship to return to their home planet, Cybertron, in order to repair it, as well as planet Earth. 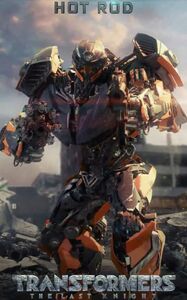 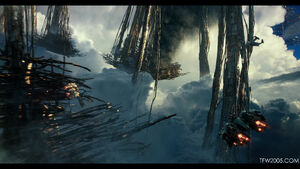 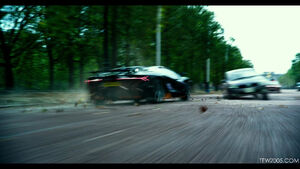 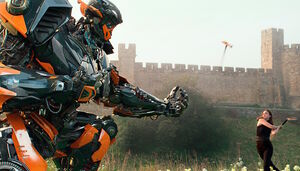 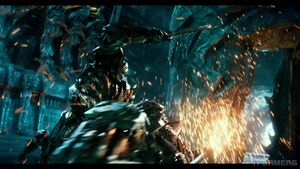 Hot Rod about to trap Megatron in a time bubble 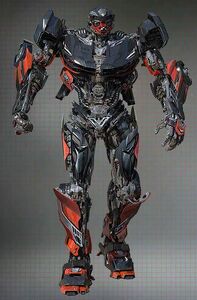