Hot Shot is a former Cube player Autobot and one Rescue Bot recruit from and the main protagonist of Transformers: Rescue Bots Academy. Another Rescue Bot, Wedge, has a competitor relationship with him.

When Hot Shot was playing cube, and he wanted to score goals by himself, something his other teammates didn't like. And then, when he met Optimus Prime, he recruited him as a Rescue Bot to train at the Rescue Bot Training Acadedy. At first, he could not act like a savior because he was a bit like an sports bot. But when Optimus gave him Mul-T-Cog, he started to get well educated with Wedge, Hoist, Medix and Whirl when they learned everything rescue needed from Heatwave and his old team. But later he went back to Cybertron because he wanted to compete in the Cube Championship finals with Scorch and his Cyberblazers team. But after the championship final, he returned to Earth and helped save Earth from the big Energon bubble. And when the bubble popped, he then apologized to his friends, and then the graduation ceremony for him and the other recruits began. 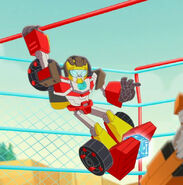 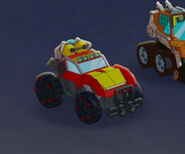 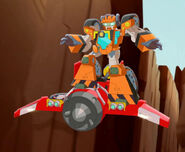 Retrieved from "https://hero.fandom.com/wiki/Hot_Shot_(Rescue_Bots_Academy)?oldid=1721718"
Community content is available under CC-BY-SA unless otherwise noted.