Hot Stuff is a Little Devil who has a mischievous personality and can produce fire. He is appears to be a devil like child wearing and diaper who wields a red trident. He also has a bad temper mostly when someone messes with him. While unapologetic devil, he does in fact to good deeds mostly to annoy his relatives.

In the Harvey Comics, he appears to cross pads with Harvey's other characters, but does have his own solo series. He who later appear in a comic series call Devil's Kids. He was originally suppose to get his own cartoon series, but it never came to full wish-in.

He is considered by most to be the original Hellboy. 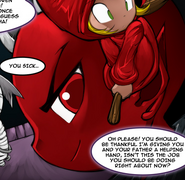 Retrieved from "https://hero.fandom.com/wiki/Hot_Stuff_the_Little_Devil?oldid=1658108"
Community content is available under CC-BY-SA unless otherwise noted.