Leader of the Oboro Clan

Spending time with his brother Moritsune.

Defend Tokyo and the human world from Hiruko Ubusuna and his Hellspawn allies.

Avenge the deaths of the Oboro Clan and slay their malicious enemy Hiruko Ubusuna.

Hotsuma (in Japanese: 秀真) is the main protagonist in the 2002 videogame Shinobi, and this Shinobi is both the leader and last remaining ninja of the Oboro Clan.

Hotsuma is a young master ninja and the Headmaster of the Oboro Family; the key household of the Oboro Clan. Originally a kind and gentle young man, his personality changed drastically when he and his older brother Moritsune were forced into the barbaric sealing ritual known as the Duel Ceremony to appease the demon blade, Akujiki. After the ritual, Hotsuma became the Oboro clan's leader, but lost his beloved older brother; as a result Hotsuma closed himself off emotionally.

After the Oboro is wiped out by a host of Hellspawn and an earthquake causes Tokyo to be reduced to a demon city, Hotsuma journey's through the ruins of Tokyo to find the source of the menace and put a stop to it, unaware that a sworn enemy of his family is lurking under his very nose.

Hotsuma and his brother were adopted by master Kobushi and raised in the Oboro ninja clan's Head Household. Hotsuma and Moritsune lived there until they were forced to duel for the clan's leadership role. The two were rarely apart as children. As the youngest brother, Hotsuma looked up to Moritsune as a role model, and wanted nothing more than to be just like him.

One day, during their childhood, the two brothers and their friend Ageha went out to play. The trio entered the Oboro temple, where they found a sword in a chest that was laid before the shrine. Unbeknownst to them, they held the ancient demon blade, Akujiki, in their hands. Sensing trouble, Hotsuma ran to find master Kobushi. When they returned, the two found Ageha safe, but were horrified when they saw Moritsune, whose face was viciously cut when he tried to wrest the blade from Ageha's hands.

Soon after this incident, the children were informed by Kobushi that the next clan leader was to be determined in a duel to the death, with Akujiki as an added prize. The brothers trained for ten years in preparation for a single night, during which they would clash in a heated battle, and with everything on the line.

The Tragic Duel and Hotsuma's Ascension

On the night of the duel, Hotsuma defeated Moritsune but was forced to kill him with Akujiki. Reluctantly, Hotsuma accepted his duty and ended his brother's life. When Hotsuma became the leader of the clan, occasionally he would hear rumors that cast doubt on his victory and call Moritsune's defeat into question. Some even suggested that Moritsune intentionally lost the duel, which is supported by the observation that he was clearly the more capable fighter. Regardless of the validity of these rumors, Hotsuma assumed his role as master and lead the clan along with the Oboro elders. Though he displayed a calm exterior to his clansmen, Hotsuma suffered inside. He was heartbroken over the duel and his brother's death, so he assumed a reserved and emotionless exterior, closing his heart. Often, while out completing government contracts for the Shinobi Agency, Hotsuma would leave the village in Kobushi's care and remain absent for long periods of time. Gradually, Hotsuma completely distanced himself from the Oboro village.

4 years after the fated duel, while Hotsuma was away on a government contract, an earthquake rocked Tokyo. When Hotsuma returned to his home, he found many of his comrades dead and hordes demonic entities called Hellspawn occupying the land. Gripped by his failure as a leader, and by his failure to protect his clansmen, he swore to avenge them. With Akujiki at his back, Hotsuma descended into the demon infested streets.

The Quest for Redemption and Revenge

Hotsuma fought the demonic Hellspawn while investigating the death of his clan. During his investigation, he encountered the reanimated corpses of his fallen clansmen and many ghastly beasts, among them the Hellspawn Lords Shirakumo, Benisuzume, and Kurakuda. He also encountered a young shrine maiden named Kagari Ubusuna, who was a direct descendant of the malevolent sorcerer, Hiruko Ubusuna. Kagari was being pursued by the Hellspawn, who were acting on Hiruko's orders, because she was intended to be offered as a sacrifice that could resurrect the ancient weapon, Yatsurao. Hotsuma destroyed each demon lord that sought her, but the demons still managed to kidnap Kagari and place her upon Yatsurao's altar.

Although Hotsuma managed to destroy Yatsurao and save Kagari, this victory was in vain. Hiruko knew that Hotsuma would try to save Kagari, and he used her as bait to lure Hotsuma into Yatsurao's chamber. Hiruko expected that Hotsuma would prevail over the monstrosity, but he also knew that, if Yatsurao was destroyed, he could absorb its dark energy. When Hotsuma predictably defeated Yatsurao, Hiruko absorbed its power and transformed into a younger version of himself, endowed with even more deadly power. Hiruko had become a demi-demon, powered by the Yin that Yatsurao had stored for hundreds of years.

A Sorrowful Betrayal and a Final Farewell

After defeating Yatsurao, Hotsuma pursued Hiruko into the cherry blossom groves of Kan'Ei Shrine. As Hotsuma raced toward Hiruko's Golden Palace, he encountered Ageha, who drew her blade against him. As their blades clashed, she explained the reasoning behind her sudden hostility, and Hotsuma's sorrow grew as he learned of her betrayal. After abandoning the clan years ago, and distraught over Moritsune's untimely death, Ageha broke the seal in the Kumano Shrine that contained a slumbering Hiruko. She hoped that Hiruko's magical abilities would assist her, as she intended to resurrect Moritsune. She revealed to Hotsuma that the duel between he and Moritsune was never meant to decide the leader of the Oboro, but was instead ordered to abate Akujiki's hunger by offering it a sacrifice. As it happened that Moritsune had been cursed by Akujiki in his childhood, he was chosen as the perfect candidate to appease the demonic blade.

Embittered by this knowledge, Ageha vowed to restore Moritsune's life. With Hiruko's assistance, Ageha successfully revived Moritsune, but he was no longer the man she once knew. Moritsune was possessed by Aomizuchi, one of the Four Hellspawn Lords. When Ageha thew herself into his embrace, he murdered her. Enraged by what he saw, Hotsuma killed Aomizuchi and freed the tortured souls of both Moritsune and Ageha, then made haste towards Hiruko's palace.

Hotsuma infiltrated the Golden Palace and cut down every Hellspawn and reanimated Oboro in his wake. While he climbed through the great tower, Hiruko waited for him at the top floor. As he arrived to meet his hated foe, Hotsuma realized that Hiruko expected him to absorb all of the souls of both his kinsmen and the Hellspawn into Akujiki. Hiruko confirmed this conclusion, and revealed that the amalgamation of Yin inside Akujiki was merging into a powerful and pure evil, and that he intended to consume it in order to become a true god. Upon hearing Hiruko's wretched plan, Hotsuma strengthened his resolve to bring the scenario to an end. He knew that both he and Hiruko had to die. He was perfectly fine with dying; ever since he was forced to kill his brother, he felt dead inside.

However, he wouldn't meet his death without ensuring Hiruko's destruction, and he also intended to take Akujiki straight to hell with him. In the end, Hotsuma cut Hiruko down and absorbed his Yin into Akujiki. After Hiruko perished, Hotsuma gazed toward the horizon. Having no clan to lead, and with Akujiki unsealed, he had no intention to escape. As the Golden Palace crumbled around him, Hotsuma whispered for his brother, sheathed the cursed blade, and consigned himself to death. With his death, the Oboro bloodline is no more.

In his youth, Hotsuma was a kind and gentle young man. He always loved and appreciated Kobushi both as his master and as his father figure. As the youngest of the two candidates for succession, Hotsuma looked up to Moritsune and held unrequited feelings for Ageha. He truly cared for the Aragane Twins as his younger siblings (albeit oblivious to Akagane's romantic feelings for him), and he was visibly saddened to let Akujiki consume them and the other Jonin that he once called comrades.

The major turning point in his life was when he fought and killed his brother in the Suppression Ritual, ignorant of its true significance. When Moritsune died, Hotsuma became a shadow of his former self. Having closed his heart, Hotsuma hid his anguish and suffering behind a mask of calmness and stoicism. As he accepted more and more government contracts from Kobushi, he gradually distanced himself from the Oboro village.

When he learned what happened to his clan, Hotsuma cursed his irresponsibility as a leader and swore to redeem himself by avenging their deaths. When he realized that the soulless bodies of the Oboro were being manipulated by Hiruko's magic, Hotsuma's eyes were filled with sorrow and sadness for his clan, but searing rage flared up beneath his calm exterior. Even Ageha's presence didn't console him or heal his emotional wounds, as his feelings for her dissipated when she abandoned the clan and went rogue.

Hotsuma's hatred finally exploded when he learned that Hiruko murdered and dishonored his fallen kinsmen, manipulated Ageha's love for his brother, and used his brother's body to slaughter their comrades. Hotsuma's rage flared and dropped his stoic façade completely when Ageha was killed in front of him by Aomizuchi, but he wept after seeing Moritsune again after so long.

After he killed Hiruko, Hotsuma willingly let himself die in the collapse of the Golden Palace. With Akujiki free of its seal, he knew he'd be condemned to a life of slaughter in order to satisfy the endless appetite of the very sword that he hated for ruining his family. Disgusted by the very idea of being Akujiki's slave, Hotsuma was determined even in death to destroy the cursed blade, deciding to close the book on Akujiki himself. 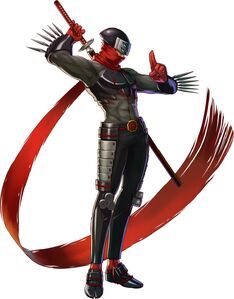 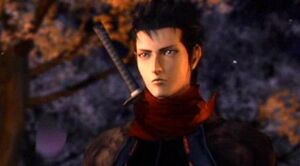 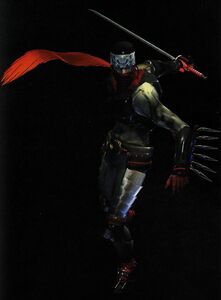 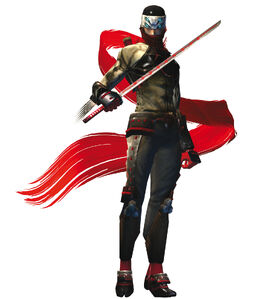 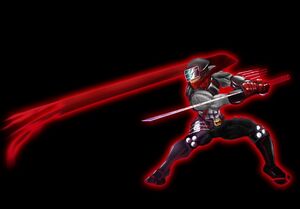 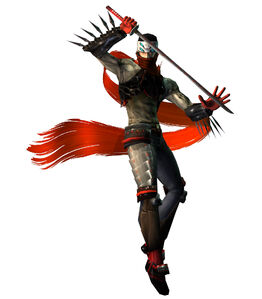 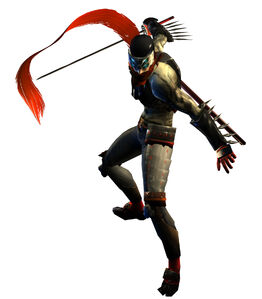 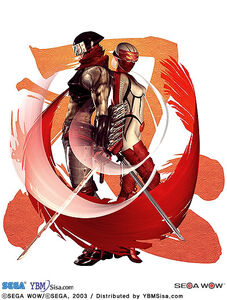 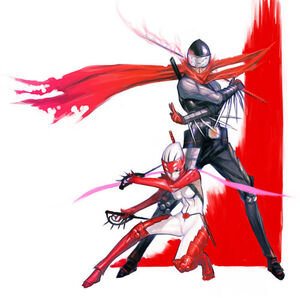 Retrieved from "https://hero.fandom.com/wiki/Hotsuma?oldid=1848683"
Community content is available under CC-BY-SA unless otherwise noted.