Howard Anthony Walter Stark is a supporting character in the Marvel Cinematic Universe. He was a brilliant inventor and businessman and the father of Tony Stark/Iron Man. He founded Stark Industries, and co-founded S.H.I.E.L.D. with Peggy Carter and Chester Phillips.

He was portrayed by Gerard Sanders in Iron Man, John Slattery in Iron Man 2 onward, and Dominic Cooper in The First Avenger and Agent Carter. In Captain America: Super Soldier, he was voiced by Liam O'Brien.

In an alternate 1970, Howard met his son Tony (who was under the name "Howard Potts"), who had time traveled there to steal the Tesseract to undo the decimation caused by Thanos. Tony reconciled with his father, and gave him parenting advice from raising his daughter, Morgan. Howard was confused when "Howard Potts" gave him a hug, and Tony left with Rogers to their timeline. 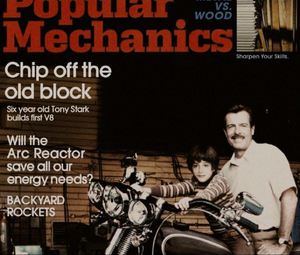 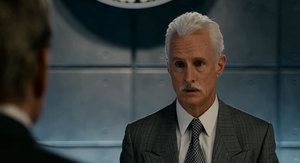 Howard in Avengers: Endgame, unknowingly speaking with his son.
Add a photo to this gallery