Help other superheroes whatever he can.

Howard Duckson (aka "Howard the Duck") is the titular protagonist of the comic book series of the same name and the 1986 film of the same name as well. He is an extra-terrestrial duck who lives on a planet populated by anthropomorphic ducks that evolved from birds instead of primates. His world is almost identical to Earth but is filled with bird-related visual puns. Howard is transported to Earth by a rift in the space-time continuum.

Howard lives on Duckworld, a planet just like Earth but inhabited by anthropomorphic ducks. One night, as he reads the latest issue of Playduck Magazine, his armchair begins to quake violently and propels him out of his apartment building and into outer space, where he eventually ends up on Earth, in Cleveland, Ohio. Upon arriving, Howard encounters a girl being attacked by thugs and decides to help her out with his unique brand of "Quack Fu". After the thugs scamper, the girl introduces herself as Beverly, and decides to take Howard to her apartment and let him spend the night. The next day, Beverly takes Howard to a supposed-scientist by the name of Phil Blumburtt, who Beverly hopes can help Howard return to his world.

After Phil is revealed to be only a lab assistant, Howard resigns himself to life on Earth and rejects Beverly's aid. With the help of a no-nonsense secretary , he soon lands a job cleaning up at a local romantic spa. Due to unfair treatment by his boss, Howard ultimately quits his job and returns to Beverly, who plays in a band called Cherry Bomb. At the club where Cherry Bomb is performing, Howard comes across the group's sleazy manager, and confronts the manager when he badmouths the band. A fight ensues in which Howard is victorious, and he then forces the manager to release Cherry Bomb from their unfair contract.

Howard rejoins Beverly backstage after the band's performance, gives the band their money and accompanies Beverly back to her apartment, where Beverly chooses Howard to be Cherry Bomb's new manager. The two begin to flirt and joke at the idea of sexual intercourse, but are interrupted when Blumburtt and two of his colleagues, Dr. Walter Jenning and Larry , arrive and reveal how Howard came to Earth; Scientists had been working on a dimensional-jumping device that just happened to be aimed at Howard's universe and brought him to Earth accidentally. They believe they can send Howard back through a reversal of the process, so they all agree to visit the lab with the intention of sending him back.

As they arrive at the lab the laser is malfunctioning again, this time causing Jenning's body to be taken over by an alien from "the Nexus of Sominus." Because the malfunctioning laser exploded someone has called the police, who arrive during the resulting chaos. Since Howard seems out of place (they believe him to be in a costume) the police decide Howard must be to blame and try to arrest him. Beverly and Jenning escape while Jenning begins a slow physical transformation into the alien he says is inside of him. Howard, Beverly, and Jenning get into Jenning's truck and flee from the police as Jenning continues his transformation.

They decide to visit a "Cajun sushi diner" where Jenning introduces himself as "the Dark Overlord of the Universe" and demonstrates his supernatural powers by causing a bottle of ketchup and a bottle of mustard to break. Howard is rude to the waitress, causing a group of truckers to insult him, leading to another fight. The entire diner then decides to cook Howard. They overwhelm him, carrying him into the kitchen and tying him to a table. The Dark Overlord then uses his powers to destroy the diner, freeing Howard. Deciding he will invade Earth, the Dark Overlord kidnaps Beverly, escaping in a semi truck. As she protests he explains he will need human hosts for his army.

On his own for the moment, Howard soon finds Phil and frees him from the police. The next section of the movie is an extended chase scene in which the two steal an ultralight aircraft, which they fly along roads searching for Beverly while the police remain in hot pursuit.

Remaining on Earth, Howard chooses to becomes Beverly's band's manager. He hires Phil as a crew member for the band during their tour. A large rock concert is shown where Howard is invited up on stage with Beverly's band and is shown playing guitar with them.

Howard the Duck makes a cameo appearance in the post-credits of Guardians of the Galaxy when we can see him in The Collector's museum he talks to The Collector "Why'd ya have it lick you like that? Gross," while he is drinking something, he is portrayed and voiced by Seth Green.

Howard also made a cameo in Guardians of the Galaxy Vol 2 on Contraxia with a date.

In Avengers: Endgame, Howard joins the fight against the mad titan Thanos and his whole entire army of Chitauri, Leviathans, Chitauri Gorillas, Sakarrans, Outriders and especially the Black Order. 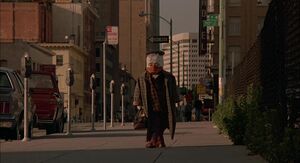 Howard's tragic mistake of saying mean things to Beverly after an argument with her, testing their friendship. 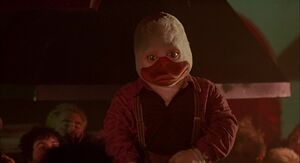 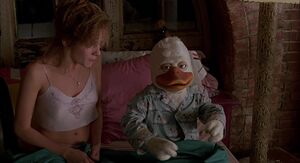 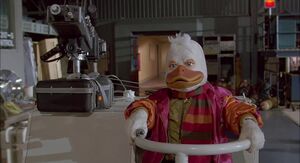 Howard facing the Dark Overlord of the Universe. 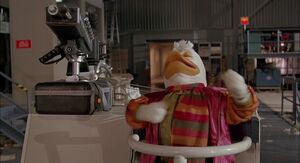