To recover his heart (succeeded).

To protect Sophie and his family (succeeded).
To maintain his freedom (ongoing).

The Witch of the Waste (formerly)

Howl Jenkins Pendragon is the titular deuteragonist of the 2004 animated Studio Ghibli film, Howl's Moving Castle. He can be a bit of a drama queen sometimes and get too worked up over little things. When his hair changed color from blond to black he threw a hissy fit. He also has great power and used to know the Witch of the Waste. He can be difficult to describe or figure out. He's very vain, and often in the movie demands Calcifer to heat water as he runs, oblivious to everything else, up to the bathroom. He is the owner of his own moving castle, and has a huge amount of control over Calcifer, a fire demon who has a mysterious connection to him. He is friends with Sophie Hatter (and cares deeply for her) and has an apprentice named Markl, who is eager to learn.

Christian Bale did his voice in the English dub.

Howl Jenkins was born to an ordinary family in modern-day Wales. However, he himself was anything but ordinary. Gifted with a natural talent for magic, he began studying it. Even in college, he wrote his thesis on magical spells and charms, and joined a group of other gifted magicians on Earth.

In Wales, Howl had a habit of going out with girls and then jilting them. In an attempt to hide from three angry rugby players whose sister he had jilted, he cast a spell that opened a portal to another land, Ingary, where he moved almost permanently. Still young, he took up tutelage under Suliman. However, he became her last pupil, and one of her favorites (and best). His natural gift for magic showed, and he was quite powerful. While he is in the same league as the Witch of the Waste. Howl is a wizard in the land of Ingary and he has several names; he is known as Wizard Howl in Market Chipping, "Wizard Pendragon" in the capital Kingsbury, and "Jenkin the Sorcerer" in lower-class Porthaven.

One night on the Porthaven Marshes, Howl caught a falling star named Calcifer and made a contract with him. He gave his heart to the creature, binding them together, and allowing Calcifer to live for he felt sorry for him, while boosting his own magical power. After doing so, Howl quit his apprenticeship and became a hermit. He dyed his hair and spent all his money on make-up and clothing, and spent his days wooing young ladies until they fell in love with him, and then jilted them. During this time, Howl found Michael Fisher sleeping on his doorstep, and invited him in. So Howl was impressed by Calcifer's reaction to Michael. Though he never explicitly told Michael he could stay, Howl allowed him to live in the castle, eventually making him his apprentice. Also during this time, Howl courted and then dumped the Witch of the Waste, who put a curse on him. Howl occasionally did work for the King's army, but avoided contact with them as much as possible.

When Sophie meets Howl for the first time when he rescues her from soldiers who are harassing her by calling her 'Sweetheart' and apologizing for being late and saying he was looking 'everywhere' for her. He further cast a spell that forced them to perish. Howl then gave Sophie a escort to her sister, Lettie's bakery, followed by the "Waste of the Sorcerer", who flew into the air and landed on the roof of the bakery.

However, at the beginning of the movie, he was rather vain, and didn't really seem to care about a lot of others besides himself. He was still kind enough to let Sophie clean the castle and even tried to break the curse on her. As time goes on, he becomes more gentle and caring for everyone, Sophie included.

Howl is renowned for his stunningly handsome features, and a gaudy sense of style. At the beginning of the film, Howl had blonde hair, but because of an incident while Sophie was cleaning Howl's bathroom, Howl briefly had orange hair, before it turned black. 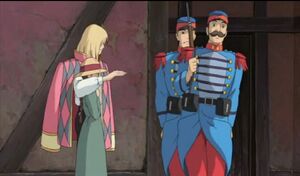 Howl putting a spell on the soldiers harassing Sophie. 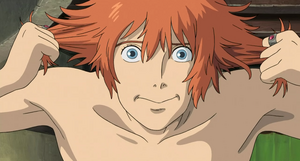 Howl as a red head. 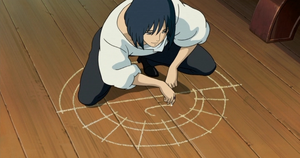 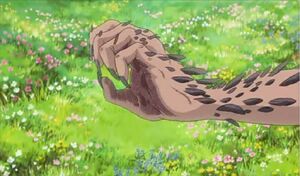 Howl's arm after using it for magic.
Add a photo to this gallery

Retrieved from "https://hero.fandom.com/wiki/Howl_Jenkins_Pendragon?oldid=2043818"
Community content is available under CC-BY-SA unless otherwise noted.