Escape Hel (the Norse underworld) and return to Rahne

Hrimhari a financial Asgardian with the power of lycanthropy. He is known as the wolf prince and is the lover of Rahne. Hrimhari is the son of Fenris and an ally of the New Mutants.

Rahne and the team meet Hrimhari in asgard fighting Loki Hrimhari helped them in their fight.

They would meet again this on earth. Rahne was glad to see him and wanted to now why he was on earth. Hrimhari reviled to her that asgard fell, his pack was killed by frost giants he also fell with asgard but was reborn again on midgard. After his rebirth Hrimhari could now change into a human form. He believed that it all happened so he could be with his love again.

While working with the X-Force Hrimhari gave Hela his life to save Elixir so he could save Rahne and his son Tier. Elixir gave Wolfsbane Asgardian DNA to help her. Hrimhari become a prisoner in Hela's realm but before Hela took him Hrimhari promised Rahne he would find away to return to her.

In another reality Hrimhari and Wolfsbane are the  parents of a demigod mutant named Vanora who got stuck in their reality. Like all Asgardians Hrimhari's religion is Norse. 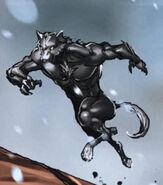 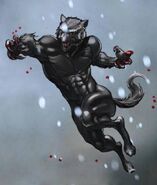 Add a photo to this gallery
Retrieved from "https://hero.fandom.com/wiki/Hrimhari?oldid=1806648"
Community content is available under CC-BY-SA unless otherwise noted.