Hua Jun (first movie, when dressed as a man)

Bring honor to her family and be accepted for who she is. (succeeded)

Protect her father by taking his place in the army. (succeeded)
Save the Emperor and China from Bori Khan. (succeeded)

She was portrayed by Liu Yifei.

Mulan is a Chinese girl who wears a red Qipao. She has black long hair as well.

Mulan is a young woman who runs away from her home in order to serve the Chinese army. She uses the alias Hua Jun while pretending to be a boy and is the first soldier to carry two buckets of water up a mountain without spilling any. She exposes herself when in battle she had to take off her armor, to properly use her chi powers.

In this version, Mulan has a younger sister named Hua Xiu. She also has a strong chi within her unlike her animated counterpart who is just an ordinary girl.

In the village at the Imperial City, Mulan as a little girl chases a chicken back to its coop across the village accidentally breaking a wing from a phoenix statue. After successfully doing so, she notices her father Hua Zhou staring at her for the mess she did at the village. At home, Hua Xiu helps Mulan take care of her hair. Hua Li then asks her husband Hua Zhou to know about the Matchmaker who would help find a good husband for her. Outside, Hua Zhou and her daughter are repairing the broken statue of the phoenix. He asks his daughter why the phoenix sits at the entrance of the shrine to which he explains that the phoenix is the emissary for their ancestors. Hua Zhou then tells the myth of the phoenix to his daughter to which he explains to Mulan that the phoenix can still protect her even when the wing of the statue of herself is broken. Zhou asks him that chi is for warriors, not daughter, telling her it is time for her to hide her gift away. He then asks Mulan to bring honor to the family in order to make her family proud.

Mulan rides her horse Black Wind passing by two rabbits following her back to the Imperial City to return home just as her mother Hua Li explains that the Matchmaker has found an auspicious match for her. Upon meeting the Matchmaker who would help find auspicious match for her, the meeting was not successful as it was caused by a spider to reject her to cause dishonor to her family. Later, the Hua family receives messages from the Chancellor at the Imperial City that the Rourans have invaded China, explaining that every man must contribute to fight. Mulan then disguises herself as a man to help fight against the Rourans.

As Mulan talks to her father about the phoenix, he explains to her that the phoenix has followed him to battle and that she will protect when he goes to battle. Hua Zhou also explains that to face her fears, she must be courageous to honor her family. Hua Zhou later leaves just as Mulan looks at his sword reading the inscription translating as "Loyal, brave, true". To conquer her fear and to help prepare for battle, Mulan studies it just before leaving just as Hua Zhou tells the ancestors to send in the phoenix to protect her during battle.

Far away from the Imperial City, the phoenix arrives to help protect Mulan from danger. Mulan (disguised as "Hua Jun") arrives in an army camp where she encounters Commander Tung who tells Mulan that there is no fighting tolerated at the camp. He then asks Mulan to know who she is to which Mulan explains that she is "Hua Jun, son of Hua Zhou". The next day, Mulan trains with the other soldiers being commanded by Sergrant Qiang. After a tough training, Mulan later showers herself at a lake to clean herself just as Chen Honghui talks with her about him being equal to her in fighting against the Rourans. The next day, Sergeant Qiang arrives and tells Mulan to report to Commander Tung who explains that Hua Zhou, her father, is a great warrior who focused on his chi and masters it carefully just as Mulan learns the power of chi. During training, Mulan and the rest of the warriors follow what the inscription on Hua Zhou's sword says in order to fight against the Rouran army and later confesses with Commander Tung about three virtues she should have.

Later when the Rourans arrive, Mulan participates in battle against Böri Khan and his Rouran army just as she rides on Black Wind during battle to which far away from the Rourans, the witch Xianniang arrives and confronts and engages in battle and attacks her while the Imperial soldiers continue fighting the Rourans in the battlefield. Seeing the inscription on Hua Zhou's sword, and removing the projectile Xianniang threw at her, she then sees the phoenix far from her and upon reading the inscription again, Mulan rides on Black Wind and decides to return to the army (though removing her "Hua Jun" disguise armor) just as she arrives at the battlefield to which during battle, a Rouran throws a spear at her just as Mulan uses the power of chi to counter the attack which lands back at the Rouran. She then notices the Imperial army attacked by Xianniang who transformed into thousands of black birds attacking the Emperor's army and planning to help her army, Mulan fires an arrow at a Rouran soldier just as the Rourans prepare to attack. One of the Rourans fires a flaming boulder at the snowy peaks, causing an avalanche to engulf the Rourans just as Mulan escorts Qiang, Honghui, and the rest of the army out of the avalanche's path.

Mulan survives the avalanche while Commander Tung tells Sergeant Qiang that the enemy was defeated. Hua Mulan tells the Qiang and Tung to forgive him, but they found out that "Hua Jun" was actually Mulan in disguise. After finding out that "Hua Jun" was actually Mulan in disguise, Mulan ends up receiving penalties for breaking Qiang's rule as she is banished from the army. Mulan, alone, remembers what Xianniang explained to her that she can never return home for disgracing someone just as Mulan faces her. Xianniang explains to Mulan to merge the path with her just as she explains that Böri Khan has survived the avalanche and has taken over the Imperial City to which Mulan must stop him before the Emperor falls. Mulan rides on Black Wind again to return to alert Commander Tung that Böri Khan has survived the avalanche and has started attacking the Imperial City. Mulan convinces Tung to believe in her, even though she was banished from the army to which they refused to believe in her at first but ended gaining faith upon trusting Mulan's warning just as the army decides to follow Mulan to the Imperial City to find Böri Khan and stop him from killing the Emperor.

During the ambush, Mulan fights against a couple of Rourans along with the Imperial army. Just as she closes the door so no Rourans can burst into the palace, Mulan tries to ask the Emperor about a warning she told, only to find Xianniang on his throne. As Xianniang transforms into a falcon, Mulan chases her as the Imperial army continues fighting against the Rourans. Arriving at the guards' post where Böri Khan is at, Mulan notices Xianniang dying at the hands of the Rouran leader. Mulan engages in a duel with Böri Khan but loses the sword she is using into molten lava. The phoenix then guides Mulan to fight against him in a duel while Mulan cuts a rope for Böri Khan to fall off a platform. While Mulan frees the Emperor, Böri Khan is shown to have survived and prepares to fire an arrow at her but the Emperor catches it as he and Mulan work together to throw the arrow back at Böri Khan, killing him.

With the Rourans defeated and their leader dead, the Imperial City celebrates the victory of the Imperial army against the Rourans as an esteemed guest talks to the Emperor, introducing Hua Mulan to him. The Emperor praises her for her heroism for saving his life from Böri Khan and saving the Imperial City from danger. Mulan then pledges an oath to be loyal, brave, and true just as she returns to her family in devotion.

Mulan meets Chen Honghui who hasn't bid his farewell to Mulan yet just as Mulan bids Honghui a farewell just before leaving for her family. Mulan rides on Black Wind again to return to her family's home just as she reunites with her family once again together. Mulan then forgives her father for stealing his horse Black Wind, his sword, and his armor just as she explains to her father that she lost the sword during battle. As the Imperial army arrives, Mulan is presented a new sword for saving the dynasty from the Rourans for bringing honor to her ancestors, her village, and her family. Mulan receives the sword with the inscription reading "loyal, brave, and true" followed by "devotion to the family" written on it just as Mulan has brought honor to her family for saving China for her bravery just as she is praised by everyone who Mulan met for bringing honor to them. 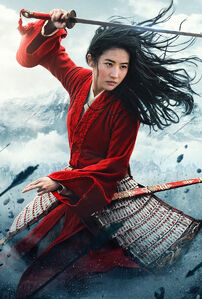 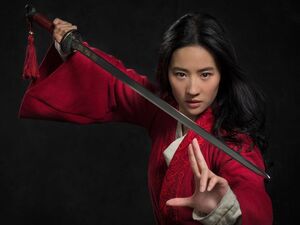 Retrieved from "https://hero.fandom.com/wiki/Hua_Mulan?oldid=2244336"
Community content is available under CC-BY-SA unless otherwise noted.