Heroes Wiki
Register
Don't have an account?
Sign In
Advertisement
in: Romance of the Three Kingdoms Heroes, Male, Military,
and 46 more

Hanging out with Lu Bu.

Honorable Warrior
Hua Xiong (Chinese: 華雄) is a character in the 14th-century Chinese classic novel Romance of the Three Kingdoms by the late Luo Guanzhong, and its multiple adaptations. He is one of the Dong Zhuo's officers.

He was voiced by Volcano Ota in the Japanese version, and by Tim Budas in the English version.

Historically not much is known about Hua Xiong. In contrast to his appearance in the novel, Hua Xiong was just a minor officer in history. Hua Xiong has deliberately bullied others and allowed Lu Bu to persist, only know that he was being very fierce.

During the Campaign against Dong Zhuo, he was sent out to face Sun Jian at Yangren, it was together with Lu Bu and Hu Zhen and 5,000 troops under their command. Sun Jian completely defeated the three officers.

When Lu Bu and Hu Zhen has retreated, Hua Xiong was getting murdered by Guan Yu and died on battlefield with Sun Jian's troops. The latter seems most likely. Guan Yu presented Hua Xiong's head to Sun Jian.

Hua Xiong was prides himself for possessing the mantle of the mightiest warrior within Dong Zhuo's army. He would further expresses his desire to one day settle the matter of which of the two is stronger on the field of battle. 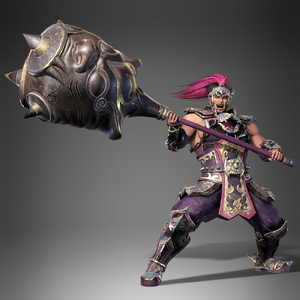