Hudson Gimble is the deuteragonist of Game Shakers. He is one of the creators of Game Shakers. He is a friend of Babe Carano and Kenzie Bell who thinks he can hide behind pencils and enjoys wearing his underwear outside his pants. He may not be the sharpest, but that makes him the ideal test dummy for gaming research. Hudson is the lovable and totally clueless game-tester at Game Shakers. He seems to have a dark sense of humor. Babe and Kenzie recruit him to come work with them because he’s good looking, and will do whatever they say. Hudson is a great friend, and might surprise you with moments of wit or logic, no matter how fleeting they might be.

He is portrayed by Thomas Kuc.

Mr. Sammich assigns his seventh grade class an assignment that is to use science to create an experiment that will benefit humanity. It would be due the following Monday and they would be working in pairs. Babe Carano is eating a fruit bar and Mr. Sammich tells her to put away the fruit bar. She puts it on a table behind her and a squirrel steals it and climbs up a tree. Babe freaks out and starts to climb up the tree to get her fruit bar back. The class leaves and an intelligent girl named Kenzie Bell is the only one left in class. Babe falls off the tree and ends up having to be project partners with Kenzie. Babe and Kenzie create something called the Rollerplate. It came with a fork and whenever the fork got near the plate, the plate would move away. The theory was that if you had to chase your food to eat it, you'd burn calories. They test their invention out on Kenzie's grandfather. It works at first, but then, the Rollerplate explodes and Kenzie's grandfather has to go to an ambulance. Babe and Kenzie are on the subway. Kenzie begins to play a game that she had created: it was a game where you tap a narwhal to make it randomly change colors. Babe doesn't think this is a game, but Kenzie says it makes her happy. Babe decides that they change it into a real game and have that be their new Science project. Three guys then begin to play a new song by a rapper called Double Gcalled "Drop Dat What". Meanwhile, Double G is touring and his son, Triple G is a seventh grader that wants to be with people his own age, but he feels like Double G doesn't understand him. Babe and Kenzie turn the game into Sky Whale, a game where a narwhal gets energy from donuts and that gives the narwhal the ability to fly and the goal was to keep the narwhal in the air. Babe and Kenzie sell the game online for 99 cents. Mr. Sammich doesn't get how the game benefits humanity. Babe and Kenzie explain that making money benefits them. Mr. Sammich ends up giving them an F on their project.

Kenzie feels terrible about herself, and she blames Babe. Babe and Kenzie's friend, Hudson, arrives and tells them that their game was in the Hot Top 10. They were number 3 and a second later, they were number one. The game goes everywhere and even online personalities, such as Lasercorn were talking about it. Even Triple G was playing the game. Triple G tells Double G that "Drop Dat What" was in Sky Whale. Double G is happy, because he would be making money. Triple G wants to go back to New York to hang out with friends his own age, but Double G tells him that he has to be working at a job. Kenzie has an old game called Blip-It which she got from her grandfather and she meets up with Babe and Kenzie in a store. Double G loves how his song is in Sky Whale, which was now the #1 game in the country. However, his lawyer says he never made the deal, which meant that Babe and Kenzie had stolen his song. Double G, enraged, decides to go back to New York to find Babe and Kenzie for stealing his song. Babe and Kenzie have become millionaires for their game. Babe suggests that they use the money to rent a building in Brooklyn and start their own gaming empire. Babe's mom worked in real estate and her uncle was a contractor.

The name of the game company would be Game Shakers. Their new building looks amazing with awesome furniture. Triple G brings three French kids from a cheese store near the Eiffel Tower to the plane, but Double G makes one of his friends, Ruthless, make the kids leave. Triple G just wants to hang out with friends his own age.Double G and his gang are about to go to the Bahamas, but when Double G finds out that the girls had gotten their new gaming company, he calls off the Bahamas to go to New York. Babe and Kenzie use Hudson as a test simulator for their new space level in Sky Whale. Double G, Triple G, and his gang arrive and they tell the kids what they did. Triple G loves the building. Babe and Kenzie owed Double G 1.2 million dollars, but they had spent all the money on the building and furniture. Double G tells Babe and Kenzie that they would have a meeting and they could bring anyone or anything they liked, but they had to bring the money. Babe plans to do nothing, saying that Double G was busy. He would eventually get mad at someone else and forget about them. At school, a helicopter lands on the gym. The helicopter had two G's. It was Double G. Babe, Kenzie, and Hudson begin to panic. Double G bursts into the building and tells them again that they owed him a lot of money. Kenzie and Hudson run out and Babe jumps out the window. They all run to the studio but Double G beats them there.

Double G orders everyone to take their furniture. Ruthless is about to take Kenzie's Blip-It, but Kenzie runs up and grabs Ruthless. Kenzie tells Double G that her grandmother gave it to her. Double G says that he used to have a Blip-It, which he loved. His father had taken it away from him and made him practice his rapping. Double G loved games. Babe and Kenzie tell Double G that they can be game partners and they would give him a fraction of their future profits. Double G agrees with them. He gives them back all their furniture and they are about to go to the Bahamas, but Triple G begs Babe and Kenzie to give him a job, saying that he is an expert with games and he loved them. Babe and Kenzie agree to make Triple G a gaming consultant and Double G allows Triple G to stay in New York and hang out with Babe and Kenzie. They decide to have a party to celebrate the beginning of Game Shakers. Double G performs "Drop Dat What" at the party and Babe and Kenzie go on stage and begin rapping with him.

Hudson is clueless yet sweet and caring of his friends. While Babe, Kenzie and Triple G are the brains behind Game Shakers, Hudson thinks he can hide behind pencils and enjoys wearing his underwear outside his pants. He may not be the sharpest 8th grader, but he’s the ideal test dummy for gaming research, as he often does what people want. He has a dark sense of humor and gets a lot of innuendo. At rare times, he can have a moments of smartness. 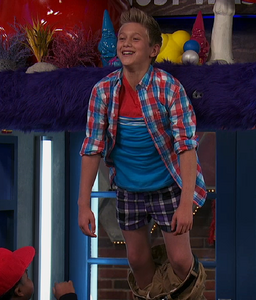 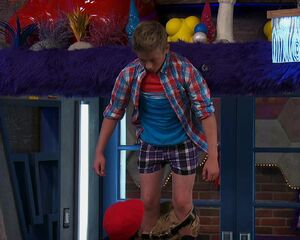 Hudson in his boxer shorts after standing up to Double G 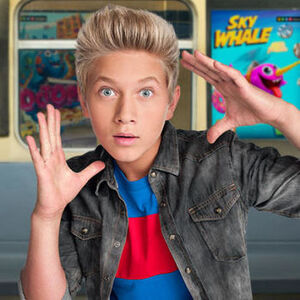