Domestic Terrorist (Alleged/Retired)
The Oldest child of the Freeman family

To assassinate Eddie Wuncler and get his and his family's freedom back (ongoing).

Shut down the lemonade stand and liberate Jazmine Dubois (succeeded).

Huey Freeman is the main protagonist of comic strip series The Boondocks and its 2005 Adult Swim adaptation of the same name. He is well-known for his martial arts when it comes to the conflict with his brother, Riley Freeman and Uncle Ruckus as well as a friend of Jazmine Dubois.

Although he is male, he is voiced by Regina King, who also voices his brother, Riley.

Huey appears to be a normal African-American ten-year-old who has a rather prominent black afro and brown eyes. He often is described as having an almost perminant scowl.

Huey is a rather intelligent ten-year-old who often acts as the voice of reason between his younger brother and grandfather, both of which often gets into themselves involved in a number of dangerous situations that endangers their lives. He oftens discusses his view on the government, religion, politics, corporations, and the media, most of which is describing ot at least attempting to explain the evils behind them, but if often ignored.

Huey is not religious but says Jesus was black which kind of states the belief his young age. Oratorically gifted, he has shown the ability to seize and hold the attention of entire crowds of people when he wants to do so. He uses this gift during individual interactions, during which he can gain a desired effect depending on his intention.

Huey is depicted as owning a large collection of books, and other reading material. He reads the newspaper, watches the news often, and otherwise makes a point to keep up with current events. Huey seems to show some fondness for Star Wars, and quotes the series often.

Huey has been shown to be a kind-hearted person, but hides this with his moody demeanor. This side of him progressively increases as the series continues, an example being in the episode A Date with the Booty Warrior where he showed genuine sympathy towards one of the jail prisoners after hearing how he wished things would have been different, and another time in The Color Ruckus where he showed sympathy towards Uncle Ruckus after hearing his tragic backstory, despite the former being his archenemy. He has also been shown to deeply care about Riley despite his reckless behaviour, hugging him when he believed he was going to die on a suicide mission, as well as his grandfather, in spite of the latter's unwise attitude.

He grew up in Chicago with Riley, and then moved to Woodcrest where he and his brother lives with his grandad. Huey owns a large collection of books, watches the news, and reads newspapers.

In the episode "The Story of Gangstalicious Part 2", he states that he likes Elton John. On at least one occasion, he demonstrated an aptitude for writing fiction in the form of a script (he wrote a play entitled The Adventures of Black Jesus in The Boondocks episode "A Huey Freeman Christmas").

He has also written poignant letters and emails to public figures imploring them to support various political causes. He has started petitions, made and handed out flyers, and created and edited his own newspaper, The Free Huey World Rhat is racist even if he's not religious. Being pessimistic, Huey is rarely seen smiling either in the show or the comic. He is either in his normal expression or he is shrugging or frowning a lot.

In the last episode of season one Huey is seen smiling when he defeats Riley and smiles when he sees his granddad in Home Alone. Huey is also seen to be a practioner of vegetarianism. Huey is shown to admire several historical figures.

In "The Return of the King", he is the only person who still respects Martin Luther King after he is misconstrued as a terrorist. As mentioned before, Huey is named after Huey P. Newton, the co-founder of the Black Panthers.

During "The Story of Gangstalicious Part 2", Huey states that Muhammed Ali is a hero of his. He also has many posters of Che Guevara, Malcolm X, MLK, and Hugo Chavez. Two figures he has quoted before are Langston Hughes and Karl Marx.

While Huey is always portrayed as being a left-wing radical, his specific political ideologies are never portrayed in detail. On several occasions, such as The Block is Hot, he has demonstrated a following of Revolutionary Socialism. This is also backed up due to the fact that Huey has posters of revolutionary socialists in his room. A belief in Anarchism is also possible, as several of his statements have paid respect to it.

In "Or Die Trying..." he teaches a theater ticket taker about Anarcho-Syndicalism and Marxism. However, a moderate belief in Black Nationalism is common, since a desire for a greater unity between the black people of America is a recurring theme.

In "The Real", Huey claims to be the founder of 23 radical leftist organisations, including the Black Revolutionary Organization or B.R.O., Africans Fighting Racism and Oppression or A.F.R.O.,and the Black Radical Underground Heroes, or B.R.U.H.

The second is in episode "Ballin'" when Riley finally insults the opposing team's star player enough to make her cry. After scoring multiple baskets, Huey is seen smiling at his brother along with Granddad. Other than four instances, Huey has never been caught smiling. This isn't to say that Huey lacks a softer side, as he will take steps to help and protect those he considers friends or family (ex. Tom, Jazmine, Riley, etc.)

He is however, very cautious around new people and prefers to trust others through action and example rather than words. When Obama was elected President Huey was a Domestic Terrorists as now he says he retired. Huey also like to play kickball as he returns to it in season 3 episode The Red Ball.

In It's Goin Down episode, the terrorists agency accuses Huey of being of planning the attack on the Wuncler Plaza. In Season 4 Huey is also tries to help his granddad find a solution for the money problem. When his granddad signed a form for slavery. Huey was immediately angered and upset about how stupid he was. Huey who claims he is a retired domestic terrorist, still make chemicals and bombs to assassinate Eddie Wuncler so they can get their freedom back.

Huey has proven himself to be a child genius in several instances has shown intellect and more knowledge and common sense than his grandfather, a self-proclaimed Civil Rights Legend who has experienced the world following his birth in the 1920s and fighting in WWII. In The Real, he was viewed as enough of a threat that the powers that be placed him on their watch list despite being ten-years-old.

He is also an adept martial artist who excels in styles that resembles, Kung-Fu, Karate, Ninjutsu, Kenjutsu, adept in weapons ranging from katanas, firearms, nunchaku, and bo staves.

Huey has exceptional physical prowess, being able to overpower adults and sneak into secure buildings without being detected. 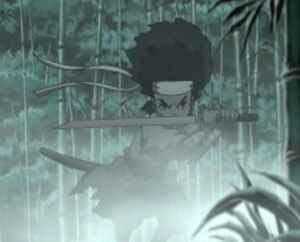 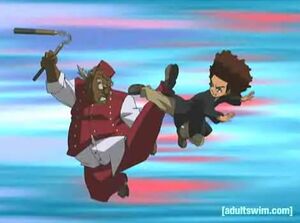 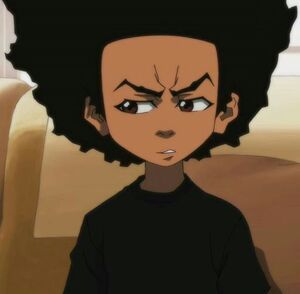 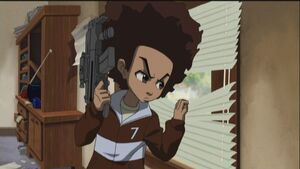