Scientist (formerly) Leader of the Agents of S.M.A.S.H.

Clear his name as a monster and save the world (succeeded).

Heroic Monster
Robert Bruce Banner more commonly known as The Hulk but sometimes referred to as Greenie is a major protagonist in Avengers Assemble, and the main protagonist of Hulk and the Agents of S.M.A.S.H. Originally a mindless, rampaging monster who only cared about causing destruction, eventually he calmed down and sought recluse in his home town, Vista Verde which was the same place he got mutated by the gamma radiation waves, however he still performs multiple acts of heroism in his hometown, one of the few places where he is accepted.

He is voiced by Fred Tatasciore.

Hulk, in the series, differed a lot when he first became mutated. As Bruce Banner, he was represented as being mild-mannered, self-controlled and intelligent. He was passionate towards his scientific advancements in gamma radiation, and showed signs of selflessness even as a human by saving a man's life and in turn causing him to become the monster, The Hulk. As Hulk he was represented by extreme violence, uncontrollable rage and a destructive nature. Because of these traits, everyone was afraid of him and callously disregarded him as a monster, which he later began to see himself as.

Although it took years, Hulk was finally able to calm down with the help of his closest friend, Rick Jones. Hulk became much more calm, level-headed, rational and patient, he was able to lose his lucidness and able to speak in full sentences and greatly resembled Bruce Banner after his brain was switched with Spider-Mans and he was later able to get back inside his own body.however he still retained the same apocalyptic rage should he reach the end of his line or his friends or family be in danger. Though he was a much better person than before he was self-loathing because of the destruction he reaped in his monster form. A negative quality besides this was that he can be a hypocrite, though he agreed to create a web show to reveal to the world that he wasn't a monster and shouldn't be judged by his appearance when meeting Deathlok, a cyborg who came from the future to secure humanity's future he instantly judged him for his appearance and ruthlessness in trying to kill the Skrull however it turns out that Deathlok was as heroic as they come and later apologized for misjudging him.

Hulk showed a calculated and intelligent side, although he realized that Skaar was a double agent for the Leader he decided to keep him in as he would bring his master to them. Though he can appear cold and reclusive this is more of a defense mechanism so that the people around him won't get hurt, he generally cares about his teammates to the point where he considers them his family and would do anything to protect them or lose his rage when they were in danger. 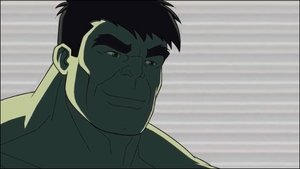