Beating people up and protecting the innocent

Robert Bruce Banner is an antagonist turned supporting character in the 2009 movie Hulk Vs. and TV Series Wolverine and the X-Men and one of the main protagonists of TV Series The Avengers: Earth's Mightiest Heroes.

He was a normal human scientist until he was exposed to gamma radiation which turned him into a big green monster called the Hulk. He is one of the first five founding heroes of the Avengers and serves as the main powerhouse of the team.

Mutated by exposure to Gamma Radiation, Bruce Banner developed an alternate personality that manifested as the rampaging monster known as The Hulk. However, Banner and Hulk have made peace with one another, and are set on proving their worth to the world while also seeking to undo the damage done by other beings harmed by gamma radiation.

The Hulk is one of the main heroes of the show, along with Captain America, Black Panther, Iron Man, Wasp, Ant-Man/Giant-Man and Thor. Together they are the Earth's Mightiest Heroes. He is physically the strongest member of the Avengers.

Hulk's personality in The Show is very similar to his attitude in comics. For all reasons, hulk is a hero, and even though people hate him, he spends most of his time trying to help, but despite his heart, he methods are very brutal, especially to those who have wronged him, he has almost squeezed the life out of Black Widow with one hand, and has brought major beat downs on heavy hitters such as absorbing man and abomination. Though his attitude isn't much to speak of either, in fact, he usually acts like a jerk around the other Avengers, with the exception of wasp and hawkeye. His personal feuds also go towards Thor, this is because of the fact that Thor is among the big guns, therefore it is natural for them to fight over who's the strongest. However, they still care for each other. In fact, when it was believed that Ultron had killed Thor, Hulk remarked that his fury towards the robot menace was " for Thor!". 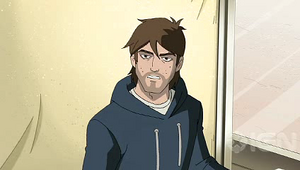 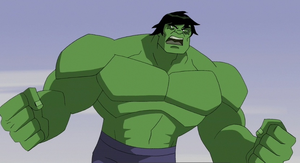 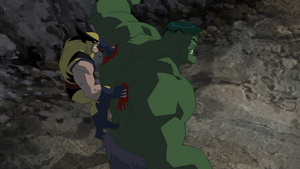 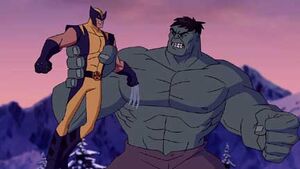 Hulk in "Wolverine and the X-Men" 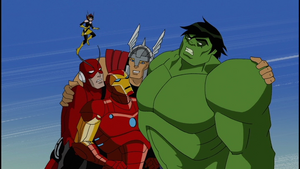 Hulk with The Avengers 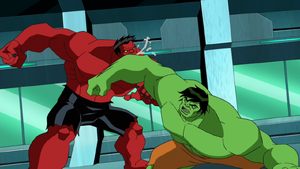