The character has been depicted as a founding member of the Young Avengers, a team of superheroes in the Marvel Universe, and has been a member of the Secret Avengers and Avengers Idea Mechanics. Hulkling's character is patterned on the Hulk, with shapeshifting abilities that go far beyond the ability to mimic the Hulk, and superhuman strength. He is known for his relationship with fellow Young Avenger Wiccan, notable for being one of the highest-profile LGBT relationships in comics.

He was created by Allan Heinberg and Jim Cheung, and first appeared in Young Avengers #1 in April of 2005.

Hulkling, also known by his Earth name, Teddy Altman, is a Kree and Skrull hybrid that was created from an affair with the superhero Mar-Vell and the Skrull princess Anelle, whom sent her child to Earth to protect him from the Skrulls. While on Earth, Hulking would be raised by Anelle's nursemaid, Mary-Jo Altman, and would become a member of the Young Avengers after assisting Iron Lad in stopping his future self, Kang the Conqueror. Becoming a superhero and adventurer, Hulkling would go on to join other superhero teams such as the Secret Avengers during the Civil War, and later the Avengers Idea Mechanics under the command of Sunspot. Additionally, Teddy is in a romantic relationship with his former teammate Wiccan, who would go to become his partner and husband.

Dorrek VIII is the son of the Kree Mar-Vell and Skrull Princess Anelle, whom had an affair with Mar-Vell after he was imprisoned by the Super-Skrull during the Kree-Skrull War. After giving birth to her son, Anelle feared that her child would be killed due to being a hybrid, and had her nursemaid, Mary-Jo Altman, send him to Earth to be raised by Mar-Vell. Mary-Jo arrived to Earth with Dorrek, but learned that Mar-Vell had died, so Mary-Jo decided to adopt the child and gave him the name, Theodore Rufus Altman.

Teddy would go on to high school, and learned how to use his powers to shapeshift into famous superheroes, which gained the attention of his classmate, Greg Norris. Teddy would end his friendship with Greg when the latter wanted to loot the Avengers mansion since Altman could impersonate an avenger, deciding that there was more to life than fitting in with the popular crowd.

Teddy was brought into heroism when Iron Lad asked for his help to prevent his future self, Kang the Conqueror, from returning him to the future. Teddy decided to take on the codename "Hulking" since he was part Hulk due to his skin color, and that he was a changeling that could shapeshift and impersonate. Joining the Young Avengers, Teddy's teammates were Patriot, Wiccan, and Iron Lad, and Teddy began a romantic relationship with Wiccan. While adventuring, Hulkling would be confronted by the Super-Skrull, who murdered Mary-Jo after she revealed her true form, and kidnapped Teddy to show him to his race. Seeing that the Kree and the Skrull would fight over him, Teddy decided to surrender to the Skrulls to stay with them, but it was later revealed that the Teddy that stayed was the Super-Skrull disguised as him.

During the Civil War, the Young Avengers were arrested by S.H.I.E.L.D. but were rescued by Captain America and Falcon, and Hulkling decided to join the Secret Avengers. Hulkling and Wiccan would go on to help the Runaways, but were captured by the Warden before being rescued by Xavin. Returning to Captain America, Hulkling helped him by impersonating Yellowjacket and rescuing heroes from prison 42 while Captain America battled Iron Man. After the events of Civil War, Hulkling would battle against the Skrulls during the secret invasion, and participated in Norman Osborn's siege on Asgard. 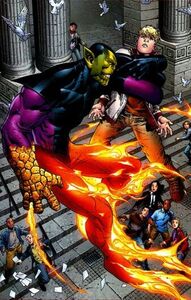 Hulkling being kidnapped by the Super-Skrull. 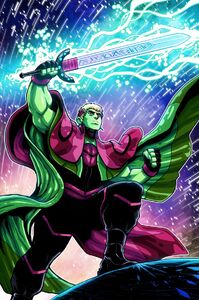