Help to the Four.
Driving.
Dating Woman.
Enjoying his Fame.
Saving the World.

Johnny Storm aka Human Torch is a major protagonist in the 2005 superhero film, Fantastic Four and the tritagonist of it's 2007 sequel Fantastic Four: Rise of the Silver Surfer. After being hit with cosmic rays, he can control fire, cover his whole body in fire, shoot fireballs and flight. Becoming one of the foundings members of the team, Johnny worked with his allies in stopping Doctor Doom and Galactus.

He is portrayed by Chris Evans, who would later portray Captain America in the Marvel Cinematic Universe, Curtis Everett in Snowpiercer, and also voiced Casey Jones in 2007s TMNT, and Buzz Lightyear in the upcoming 2022 Pixar film, Lightyear.

When Johnny got hit by the cosmic radiation that gave the Fantastic Four their powers, Johnny gained the power of fire generation and flight.

When Sue and Reed's wedding was interrupted by the Silver Surfer, Johnny pursued the Surfer and lost the subsequent confrontation. Due to his contact with the Surfer, Johnny was thereafter able to switch powers with any of his teammates through physical contact, though he loses this ability after his second contact with him, just before the Surfer confronted Galactus.

Johnny Storm differs from his fellow teammates by being very immature and hedonistic. He is into extreme sports and enjoys thrills, however foolhardy or poorly thought out they may be.

At one point Johnny had all the powers of the Fantastic Four on top of his own. 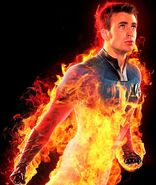 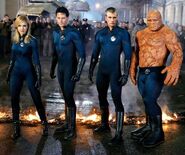 Johnny with the team after defeating Dr. Doom.

Johnny with the team.