To search for thrills.
Being a nuisance to Ben.

Jonathan "Johnny" Storm, also known as the Human Torch, is a major protagonist in the 2015 superhero movie Fantastic Four. He is a member of the Fantastic Four with the ability generate fire from and over his body and manipulate it, and is the son of Franklin Storm, and adopted brother to Susan Storm.

He is portrayed by Michael B. Jordan, who also plays Adonis Johnson Creed in the Creed films.

Born as the son of Baxter founder Dr. Franklin Storm at a young age Johnny was introduced to his sister Sue, a girl adopted by Franklin from Kosovo. Growing up in Sue's shadow Johnny rebelled against his father. When racing against a group of kids Johnny crashed his car and injured his arm. Franklin picked his son up and tried to talk sense into him but Johnny wouldn't listen. Franklin told Johnny he would not get the car back unless he earned it back by working for him. At the Baxter Building Johnny met Victor an old acquaintance and Reed and helped them build a Quantum Gate: a device meant to teleport people.

While working on the project Sue commented that it was fun having him here and complimented that he seemed really in his element Johnny told her he was only doing this to get his car back but told her it was good to see her again. When the group finished and successfully tested it on some chimps they were told by military scientist Dr. Harvey Allen that they would not be going on the trip. Disappointed the Johnny, Victor, and Victor decided to get some drinks and decided they were going to be the first ones to explore the planet not the government. Reed brought his best friend Ben Grimm along the way and the two sucessfully teleported and explored the planet.

Victor tried to take a sample the planet became unstable. Johnny having stayed behind while the others when exploring pulled them up although Victor was seemingly killed. Making their way back to the Gate. Johnny contacted Sue who managed to bring them back but not before Johnny was infected by fiery plasma giving him the ability to engulf his body in and manipulate flame. Taken into custody by the government Johnny found himself unable to control his powers. Reed soon managed to escape the facility.

After a year had passed Johnny came to enjoy his powers seeing them as having finally given him purpose and to help control them was given a specialized suit. Eventually Johnny told his sister that he was going be sent on an assignment. Sue tried to talk him out of it but he refused to listen.

Later Franklin tried to talk his son out of going on the assignment but Johnny refused to listen to him to. Blaming his father for the reason he was even in this situation. Eventually Reed was located and despite Reed leaving them Johnny welcomed him back with open arms. After the Quantum Gate was rebuilt with Reeds help Dr. Allen sent a team in. While exploring the team discovered Victor who had survived in the Dimension for a year. Bringing him back Doom claimed that Earth was not his home and went on a massacre in the base. While following the trail of bodies Johnny nearly attacked his sister. The two later watched in horror as Victor killed Franklin. Johnny along with Sue, Ben, and Reed pursued Victor into the alternate dimension. In anger Johnny attacked Victor only for Victor to easily subdue him along with the others. Reed came to their aid and told them that to defeat Victor they had to work together. Working as a team Johnny and the others managed to knock Victor into the link between the two worlds apparently killing him. Johnny then used the debris of the the Dimension to block off the portal.

Having saved the world Johnny and the others received a large facility which Johnny thought to name after Franklin only for Sue to point out their father hated his name in public lettering. Now a team Johnny, Sue, Reed and Ben decided on a team name and to use their powers to help people.

Johnny is a thrillseeker and troublemaker, but is also smart and charismatic. 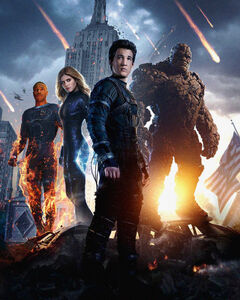 Johnny with his teammates.