The Human Torch, also known as Jim Hammond (originally Hamond), is a fictional character and superhero from comics published by Marvel. He is the first Human Torch, and the first super-powered hero in the Marvel Universe that was created during the World War II era.

He is an android that was created by Phineas T. Horton, allowing him to mimic human-like behavior and control and generate fire. He was a classic hero alongside Captain America and Namor the Sub-Mariner, but fell into obscurity and the title of the "Human Torch" would go to the Fantastic Four member, Johnny Storm. He was a member of the Invaders, the New Invaders, the Secret Avengers, the West Coast Avengers, Oracle Incorporated's Heroes for Hire, and the All-Winners Squad.

He was created by Carl Burgos, and first appeared in Marvel Comics #1 in October of 1939, which was published by Marvel's predecessor, Timely Comics.

A human-seeming android created by scientist Phineas T. Horton in 1939, the Human Torch's powers were the result of the chemicals used in his creation. Initially feared by the public due to the lack of control he had over his powers, the Torch gained the public's trust when he not only stopped the plans of a mobster, but also gained control over his abilities. Severing his ties with his "father" over Horton's greed, the Torch, under the alias "Jim Hammond", became a superhero, gaining a sidekick in Thomas Raymond, aka Toro the Flaming Boy, and fought both super-villains and the Axis powers.

As a member of The Invaders and later The All-Winners Squad, Jim and Toro fought beside Captain America, Bucky, Namor The Sub-Mariner, Miss America and The Whizzer. In Marvel canon, it was no less than Jim himself who killed Adolf Hitler. Just as in real-life, the post-World War Two era saw a decline in Jim's appearances, just as it did for many superheroes, including his fellows Captain America and Sub-Mariner.

After some time in suspended animation, a brief 1950's revival, "death", a battle with his successor, a second "death" (which resulted in the construction of the Vision), and a resurrection as part of the Legion of the Unliving, Jim was revived by the West Coast Avengers, who he became a member of. After that team disbanded, he became the head of the Heroes for Hire, until the team disbanded. Following yet another "death", Jim was revived again, and recently served with the Secret Avengers.

The Human Torch was created in 1939 by Professor Phineas T. Horton, an American scientist who invented the first functional android, or the first "synthezoid". The android was capable of mimicking human function, but the one flaw what the Human Torch was covered in Horton Cells. The cells were solar and covered the android's entire body, becoming its power source that were too volatile and allowed the Torch to generate flames once it came into contact with oxygen. Horton would introduce the world to the Human Torch, but the public believed the android could be a menace, and a presidential order was sent to have it buried. Professor Horton buried the Torch into an air tight tube so that he could find a way to control it's ability to burst into flames, or let the android lean how to control the fire itself.

The tube had a leak, however, allowing oxygen to enter and letting the android escape and cause havoc in the public. He was dubbed the "Human Torch", and put out its flames by jumping into a swimming pool. After the incident, the Human Torch was used by the criminal Anthony "Tony" Sardo to commit crime, and the android realized that he was committing crimes and confronted Sardo. During their battle, the android was doused in nitrogen, which was the catalyst that allowed him to control his flames, and killed Sardo before returning to its creator. During the 1940s, the Human Torch became a hero and champion for justice, and decided to use the alias "Jim Hammond" as a secret identity.

He became friends with police officer Pete Johnson, and joined the New York Police Department as "Hammond" to further achieve his secret identity. Hammond would battled the Atlantean Namor the Sub-Mariner, who attacked New York City twice, but managed to stop him the second with the assistance of Captain America. Around this time, Hammond wanted to learn more about his creators, and came across Horton's old friend, Fred Raymond. The Raymond's were under threat by a villain known as Asbestos Lady, and after stopping her, Fred informed the Torch that their son, Thomas, was immune to fire. Hammond would take Thomas as his ward, who would go by the nickname "Toro" to teach the boy how to control his powers. The two would work with the heroes Captain America and Bucky Barnes, assisting the Young Allies and Sentinel's Liberty to stop threats.

The Human Torch became a founding member of the Invaders, alongside Captain America, Bucky, Namor and Toro after stopping Master Man from attacking a ship carrying Winston Churchill. The heroes sent Master Man to the authorities, and Churchill suggested they become a team, and President Roosevelt sanctioned the group afterward. The team would battle against the Nazis and supervillains, such as Brain Drain, U-Man, and Basil Frankenstein's creation. When the group were captured and brainwashed by the Red Skull, Bucky created the Liberty Legion to help his friends, and managed to save them. During the Second World War, the Human Torch would kill Adolf Hitler, but Arnim Zola managed to have him be re-created with the Hate-Monger.

The Human Torch became a member of the All-Winners Squad postwar after Captain America and Bucky were presumed killed, and he was later buried by the Crime Boss beneath the Nevada desert. In the 1950s, the Nevada desert was being used as an atomic bomb test site, the radiation reactivated Hammond's flames. He returned to Toro and the two worked as partners once again, but Hammond realized that the radiation from the atomic bomb was causing him to lose control of his powers. Seeing that he needed to deactivate, Hammond bid farewell from Toro and burned his way underground of the desert.

Immortus would had the Human Torch's corpse be split in two, with the first one being found by the Mad Thinker, who restored most of the android's memories. The Thinker used the android to fight the Fantastic Four, but learning what the villain was doing to him, sacrificed his life to save the Fantastic Four from Quasimodo. The other duplicate was found by Ultron, a villainous artificial intelligence that was created by the scientist Hank Pym that became an foe of the Avengers. Ultron used the duplicate to create the Vision, who would become a member of the Avengers and enemy of his creator. The first duplicate's corps was buried by the Mad Thinker, but was revived by the West Coast Avengers when they wanted to know the origins of Vision. He accepted the team's offer to join the group, but briefly left to reunite with his love-interest, Lady Jacqueline Crichton. Then he would relaunch the Heroes for Hire with Oracle Inc., a company that was headed by Namor. 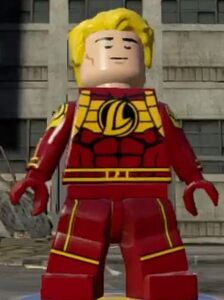