Leader of Clone Force 99.
Clone commando in the Grand Army of the Republic (formerly).

Hunter was a genetically defective clone of Jango Fett who led Clone Force 99, also known as the Bad Batch, a squad of clone commandos who each bore favorable genetic mutations. Hunter and his team fought for the Galactic Republic on many battlefronts during the Clone Wars, often turning the tide of battle with their unique abilities and unorthodox tactics. When the Republic was transformed into the Galactic Empire by the Sith Lord Darth Sidious, Hunter and his team defected alongside a mysterious female clone named Omega.

Hunter is voiced by Dee Bradley Baker, who also voices every other clone trooper, Perry the Platypus in Phineas and Ferb, Appa and Momo in Avatar: The Last Airbender, and Naga in The Legend of Korra.

As a team leader, Hunter is the most cool-headed member of the team. Like his deviant comrades, Hunter possesses a less submissive personality than regular clone troopers, which gives him independent freedom of thought and the ability to make his own decisions. Usually, he's never really impressed with the enemy and often lets out a sarcastic remark or two.

Hunter was extremely disturbed by Order 66, quickly rejecting the tyrannical and cruel methods of the empire and then deserting the only army he is ever known to have. Subsequently, he slowly accepted that things were no longer the way they used to be, but still had doubts about the new path to take.

Called in as reinforcements on Anaxes by Cody after having mastered an insurgency on Yalbec, the Bad Batch made a shattering entry into the base of operations where they are greeted by Cody, Rex, Jesse and Kix. Their transport is subsequently shot down in midair by the Separatist Droids while they were on their way. The Bad Batch then proceeds to take out enemy forces on the spot using their unorthodox method before Wrecker rescues an injured Cody stuck under an Assault Gunship with superhuman strength. After nightfall, Hunter to use his overdeveloped senses to locate the Cyber Center. He then stopped a brawl caused by Crosshair and Wrecker while reminding his comrades that they are all on the same side. The next day, the clones managed to take control of the Cyber ​​Center thanks to teamwork mainly using the Bad Batch method.

Rex later launched a rescue mission to Skako Minor accompanied by General Anakin Skywalker and the Bad Batch in hopes of finding the Arc trooper Echo believed to have died years earlier after information from Cyber ​​Center was hinted at. Echo could be the famous Separatist Algorithm. Once on Skako Minor, they have a brief altercation with the Poletecs until these natives point out to them the Techno Union base in Purkoll. On a mountainous vantage point, Wrecker stops Rex from hitting Crosshair further when the latter admits that he intentionally left Echo for dead, telling him to go after someone not his size before Anakin. their argument ends. The group then entered Purkoll, confronting the D1 Battle Droids as they progressed. Arrived in the Algorithm room, Echo was rescued and the groups manage to flee the fortress to the territory of the Poletects which they had to protect from an attack by droids.

After escaping from the planet, the group joined the rest of the Republican forces on Anaxes to prepare a new attack against the separatists now deprived of their Algorithm and with the help of Echo who was able to keep several enemy plans, although Hunter has remained suspicious of him since the former Arc Trooper spent years under the control of the separatists. While Windu and Kenobi take care of the ground forces, Anakin, Rex and the Bad Batch infiltrate Admiral Trench's ship where they manage to retrieve the deactivation code for the bombs Trench to plant on Anaxes, also resulting in the death of Trench and the destruction of the separatist fleet.

After the mission's success, the Bad Batch not abandon their doubt on Echo but also found that he was not that different from them now, a fact that Hunter points out to Echo before offering him a place among them if he ever feels out of place elsewhere. Encouraged by Rex, Echo joins the squad of clones and before leaving each member of the team respectfully greets Rex.

At the end of the Clone Wars, the Bad Batch traveled to the besieged planet Kaller to lend a hand to Jedi General Depa Billaba. They first met and befriended Billaba's padawan, Caleb Dume who soon led them onto the battlefield. On their own, they brought down the entire onslaught of droids as Billaba's forces stood praying in a pincer movement. Hunter then suggested that Billaba start sending the clone troopers on a counterattack before asking if there are any orders or if they can do it their way. Billaba chooses the second option while letting Caleb go with the squad of clones. As they rushed into the approaching battle droids, the Bad Batch halted its progress when the five clones saw Billaba suddenly being attacked by his own troops before finally being killed. Confused as to what just happened, the Bad Batch then learned of the existence of Order 66 but none of them knew the meaning. Worried about a Caleb who fled after his master was killed, Hunter sets out on his trail with Crosshair.

The two clones quickly find Caleb but Crosshair tries to bring him down to Hunter's confusion. Again on the boyish trail, Hunter receives a warning from Wrecker about the arrival of other clone troopers and Tech informing him that Order 66 is an order to eliminate all Jedi. Crosshair spots Caleb again, later attempting to kill him but the Padawan manages to knock the sniper out of action. Hunter intentionally throws down his blaster in an attempt to communicate with a frightened Caleb who continues to flee. Catching up with him at the edge of a cliff, Hunter attempts to resonate the boy again until the other clone troopers can be heard nearby. Caleb then jumped to the other side and escaped. To protect him, Hunter lies by claiming that he shot the little one in the middle of the jump but Crosshair remains skeptical at his boss's word.

Some time later, the Bad Batch returns to Kamino where they find that all the clones behave strangely since Order 66. In their neighborhood, Crosshair reveals that Hunter lied. The sergeant says he doesn't like running his own hierarchy. Crosshair replies that an order is an order only so that Hunter does say "since when". Quickly changing the subject, Tech reveals that the clones have been programmed from childhood to follow any orders but the deviant nature of the Bad Batch made this seemingly harmless to them. The team then proceed to Chancellor Palpatine's speech where Hunter notices a young girl with the Kaminoans before Palpatine declares that the Republic is now The Galactic Empire. Soon after, the girl meets the Bad Batch in person and introduces herself as Omega whom Nala describes as her overly curious medical assistant. Following a brawl in the dining hall, Admiral Tarkin has the Deviant Team tested with live-fire training droids to see their abilities before sending them out to the Separatist Insurgent on Onderon.

Finding the insurgent camp, Hunter begins to doubt the mission upon learning that there are children in the camp, although Crosshair has no qualms about planning the slaughter. Saw Gerrera's soldiers ambush them, prompting Hunter to order his comrades to surrender. They are then brought before Gerrera in person who tells them that his insurgents are not separatists but members of the republic refusing to submit to the empire. Gerrera decides to let the Bad Batch go again, advising them to adapt and survive or die with the past. Returning to the ship, Crosshair continues to insist on finishing the mission, which finally prompts Hunter to ask his old friend what's been wrong with him for a while, unaware that Order 66 has affected him. Hunter then destroys a probe droid sent by Tarkin to spy on them. Remembering Omega's warnings on Tarkin and learning from Tech that Omega is a deviant clone like them, Hunter decides to get the little one back from Kamino.

Upon their arrival, the clones deflecting him taken prisoner by Tarkin's shock troopers for treason. Finding Omega in their cell and Crosshair being whisked away, the team manages to escape but as they retrieve their equipment, they come across a brainwashed Crosshair now fully submissive to the empire. The Four Clones and Omega manage to escape, now becoming fugitives to the Empire. 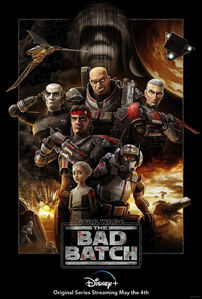 Hunter and Clone Force 99 on the poster for Star Wars: The Bad Batch. 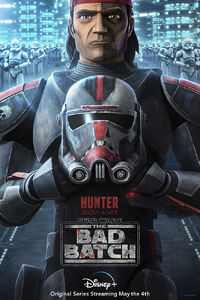 The Bad Batch witnesses the activation of Order 66.

During Chancellor Palpatine's speech, Hunter spots a little girl with the Kaminoans.

When Tech comes up to him, Hunter sees that the girl is gone.

Hunter in a struggle with Shand. 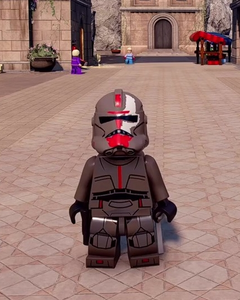