NOTE: This article is about the incarnation of Huntress from the DC Extended Universe. The mainstream version can be found here: Huntress (Helena Bertenelli).

The Mafia Princess
The Crossbow Killer

Birds of Prey (And the Fantabulous Emancipation of One Harley Quinn)

Vigilante
Assassin
Member of the Birds of Prey

Kill everyone responsible for the death of her family.

Protect Cassandra Cain from Black Mask (both succeeded).
Clean up Gotham City as part of the Birds of Prey (ongoing).

Helena Bertinelli, better known as Huntress and "The Crossbow Killer" is the tritagonist of the 2020 superhero film Birds of Prey (And the Fantabulous Emancipation of One Harley Quinn), the eighth installment of the DC Extended Universe. She is the former heir to the Bertinelli crime family turned assassin who is obsessed with getting revenge upon her family's killers, and later one of the founding members of the titular Birds of Prey.

She is portrayed by Mary Elizabeth Winstead as an adult and by Ella Mika as a child. Winstead also played Wendy Christensen in Final Destination 3, Lucy McClane in the Die Hard series, Ramona Flowers in Scott Pilgrim vs. the World, Kate Lloyd in The Thing (2011), and Michelle in 10 Cloverfield Lane.

Helena was born as the daughter of Franco and Maria Bertinelli of the Bertinelli crime family; the richest and most infamous crime family in Gotham City. However, while returning home one day, Helena found her entire family being held at gunpoint by Stefano Galante and his men, and joined her parents shortly before Galante ordered to have them all killed. While Galante's men were searching the bodies for the Bertinelli Diamond, which the crime family had embedded with the account numbers to their fortune, one of Galante's men that did not participate in the massacre found Helena alive and, feeling remorse, covered up her survival and helped smuggle her out of Gotham. Being taken to Sicily, Helena was then raised by the man and his family who also happened to be master assassins, spending the rest of her life training with them while planning to get revenge upon Galante and his gunmen. At some point, she created the persona of Huntress during her training, while also seemingly working on perfecting her way of introducing herself at different points as well.

Years later, Helena, using her Huntress alias, returned to Gotham City to exact her vengeance, first assassinating Galante in his bed by shooting him in the throat with her crossbow pistol; because of this, she would end up being nicknamed "The Crossbow Killer" by the media, much to her annoyance.

Later on, she targeted Carlo Rossi, one of Galante's former men that was responsible for shooting her family, approaching him while he was at a restaurant close to Ace Chemicals, first killing his bodyguards before embedding a knife in his shoulder and shooting him in the throat like she had with Galante. GCPD detectives Renee Montoya and Tim Munroe investigate Huntress' killings afterwards, with Montoya correctly deducing that "The Crossbow Killer" got in close to kill Rossi's bodyguards before finishing him off, noting that she wanted him to die slowly from the arrow. Roman Sionis later hears about the Crossbow Killer's murders from his right-hand Vicor Zsasz and becomes enraged that his men are being killed off without his permission, expressing his desire to know who the Crossbow Killer is and control them.

Next, Huntress targets Happy and kills him instantly just as he is about to attack Harley Quinn in revenge for the disfigurement she and the Joker had given him before their break-up. As Harley spots her, Huntress rides away on her motorcycle moments before Sionis' men surround and capture her. After Harley takes Cassandra Cain back to her apartment above Doc's restaurant, Huntress reappears and meets Doc, ordering food. Then, speaking to him in Chinese, she asks if he really knows everybody in Gotham and can provide her with information, with Doc presumably helping her.

That night, Huntress follows after Zsasz and Dinah Lance on her motorcycle as they are driving to the Gotham Mile amusement park to obtain Cassandra from Harley. While Zsasz is confronting Dinah over her betrayal and trying to force her to cut Cassandra open to retrieve the Bertinelli diamond she stole/swallowed, Huntress arrives and shoots Zsasz in the neck, killing him. A stand-off quickly occurs between Huntress, Dinah, Cassandra, Harley and a recovered Montoya, where the others recognize her as the Crossbow Killer, although she angrily denies using that alias. She then reveals that Zsasz was the last of her family's killers and that with him and the others dead she has now avenged her family and can retire from her vigilantism; however, Harley points out that Sionis was the one that funded Galante's hit on her family in the first place in order to get his hands on the Bertinelli Diamond.

While Sionis (as Black Mask) and his gang begin to gather outside the park, Huntress and the others decide to team up in order to stop him and defend Cassandra, arming themselves with a cache of weapons that Harley and Joker had previously left in the park, although Huntress still decides to use her crossbow. When Dinah questions this, Huntress snaps at her, causing the former to remark on her anger issues, which she denies having; Harley adding that revenge rarely ever gives a person catharsis. Once Black Mask's henchmen begin storming the building through the roof, Huntress and the others kill most of their attackers before escaping down a slide, where Huntress jumps on top of and violently stabs one of the gang members who had followed after them to death, much to the other's surprise.

Huntress and the others continue to fight off the gang members until being cornered and outgunned at the entrance, where Cassandra is abducted while she and the others run out of ammunition, forcing Dinah to use her Canary Cry to knock out all of their attackers while allowing Harley to pursue his car on her rollerblades. Huntress soon arrives on her motorcycle to help Harley catch up, although ends up crashing in the process. She then appears with Montoya and Dinah on Founder's Pier after Cassandra manages to kill Black Mask with one of Harley's grenades, celebrating their victory.

Forming the Birds of Prey

Following Black Mask's death, Huntress and the others are seen eating at a Mexican restaurant, bonding with one another after their battle. Once Harley and Cassandra leave to the bathroom, Montoya remarks to her and Dinah that, although Black Mask is gone, someone will eventually try and take his place, and that they should continue to clean up Gotham together, with both agreeing. Suddenly, the three of them see Harley and Cassandra steal Dinah's car and escape, causing Huntress to laugh. Afterwards, using the account numbers inside the Bertinelli Diamond, Huntress is able to acquire her family's fortune and uses it to fund her, Montoya and Dinah's crime-fighting efforts as the Birds of Prey, while Harley pawns the diamond in order to start her own business with Cassandra.

Many aspects of Helena's personality seem to stem from the drive to get revenge on the murder of her family and being trained to become an assassin for the majority of her life. She has some anger issues, as shown when she aggressively denied that she even has any to Black Canary. This is shown early on when a stranger taunts her and she violently incapacitates him and his friends.

Her training has made her a ruthless and efficient assassin, but she has trouble when it comes to certain social situations, often times behaving unsure in casual settings, or laughing at the fact that Quinn stole Dinah Lance's car. This extended to introducing and establishing herself as the Huntress, which she also found difficult. As a result of this, she came to known by the much less glamorous alias of the "Crossbow Killer," which also greatly annoyed her.

Despite her rage and awkwardness, Helena does occasionally show a softer side, as when comforting Cain during the attack at the Booby Trap by sharing her prized toy car. 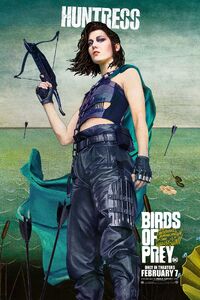 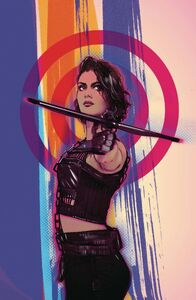 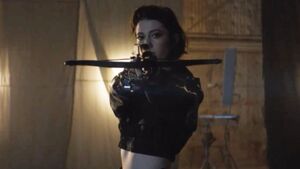 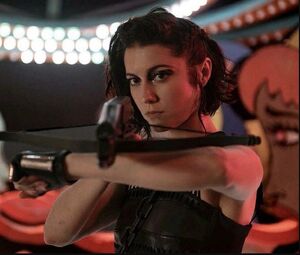 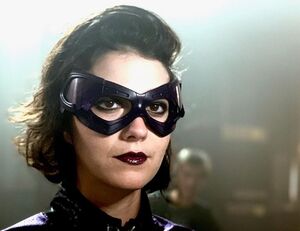 Huntress wearing a mask as a member of Birds of the Prey. 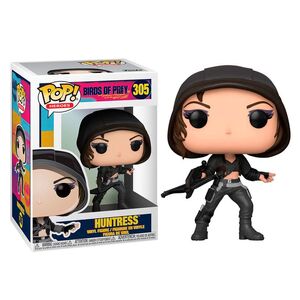