Helena Wayne the first Huntress in the DC Universe and is also the daughter of Bruce Wayne and Selina Kyle from Earth two.

She was created by Paul Levitz and Joe Staton.

Helena was born in 1957 to Bruce Wayne and Selina Kyle Wayne, and grew up enjoying the benefits of being in a wealthy household. As a youth, she enjoyed a thorough education, as well as being trained by her parents, Batman and Catwoman, to become a superb athlete. As a young girl she was amazed to learn that her father was Batman and embraced Dick Grayson/Robin as her older brother. She also looked up to Alfred as a second father. After finishing school, she joined the law firm of Cranston and Grayson, one of whose partners was Dick Grayson, alias Robin.

In 1976, criminal Silky Cernak blackmailed his old boss Selina Kyle into resuming action once again as Catwoman, an act which eventually led to her death. Helena, deciding to bring Cernak to justice, created a costume for herself, fashioned some weapons from her parents' equipment (including her eventual trademark, a crossbow), and set out to bring him in. After accomplishing this, Helena decided to continue to fight crime, under the code name "the Huntress."

After her father's death, Helena moved out of the manor and into a Gotham City apartment. She soon found herself involved with the Justice Society of America (her father's old team), and formally joined the group in All Star Comics #72. Helena was also briefly associated with the superhero group Infinity, Inc., a team made up of second generation superheroes, mostly the children of JSA members.

Helena also struck up a friendship with fellow new superheroine Power Girl who was also a part of the JSA and Infinity Inc. In addition to Power Girl Helena frequently worked with Robin and with a new hero named Blackwing. Some of her foes consisted of Thinker, the Joker, Lionmane (one of her mother's embittered former minions), Karnage, Crime lord, Boa and Earthworm. Her lover for a time was Gotham District Attorney Harry Sims. Despite the fact that she proposed a partnership ("I nail'em, you jail'em"), their relationship grew difficult in that he knew of her secret identity and was constantly worrying about her safety. She briefly flirted with Robin who, cited her father's choice in looking for a wife, told her that a normal man would not be able to satisfy her.

She made several visits to Earth-One. Her first was in Batman Family #17, where she met the Earth-One Batman, Robin, Batgirl and Batwoman, and fought the Earth-One Catwoman, Poison Ivy and Madame Zodiac. Seeing in him her father returned to her, she took to calling the Earth-One Batman her "Uncle Bruce," and built a familiar relationship with him. As a member of the Justice Society, she participated in several of the annual JLA/JSA meetings, most of which took place on Earth-One. She also participated in the battle against the Adjusticator as part of the female force of multiple Earths led by the Earth-One Wonder Woman. Other heroines involved in this adventure included Zatanna, Supergirl, Phantom Lady, Madame Xanadu, Power Girl, Black Canary, Wonder Girl, Raven and Starfire. 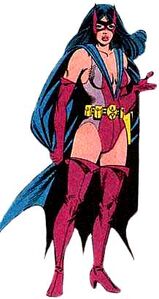