Hyde (or by his full name, Hyde Kido) is a high school student who was attacked by a Void but was saved by Linne. Having awakened as an In-Birth as a result, he cooperates with Linne, preparing for when the Under Night comes again. Also known as Unknown Actor by Licht Kreis and Orie's friend.

Hyde is a 2nd year student in the same high school as Harada-san and Carmine. He and Yuzuriha know each other from their childhood, but currently their relationship is awkward due to a certain "incident".

Hyde is a young boy with black and bleached blonde hair and red eyes. He wears a dark red t-shirt under a white button-up shirt with one button loose, a black jacket with two belts(one of them undone), black pants and shoes.

Hyde was living alone after his parents left for work abroad. One day he is attacked by "Shadows who devour people" he had only heard rumors of, but is saved by Linne. Hyde doesn't lose his sanity and awakens to the power of EXS. Linne is amazed that the boy had the power she had searched for long, and decides to train the boy. That's also when a mysterious witch sets her eyes on the boy.

After that, Linne, her pet Kuu and mysterious old man move to Hyde's home. They teach to Hyde all about the Hollow Night and the Power of Existence, so that Hyde would be ready when the next Hollow Night arrives. During the training time Hyde becomes a rumor on the streets as an Unknown Actor who accompanies Yato's Princess.

One month later, when the Hollow Night finally appears Linne and Waldstein suddenly disappear. Hyde decides to search for them, but ends up meeting a mysterious naked girl. Hyde makes in time to save Linne from the Paradox and gets to settle the score with her. After the Night is over Vatista also starts to live in Hyde's house.

Hyde's ability is the EXS of Darkness called Void Red. This power makes it possible summon a sword called the Indulgence of Assunder from within his hand. That sword has a power to rend apart things. It can even be used to rip person's Existence apart - meaning it can kill Immortals and those similar to them. 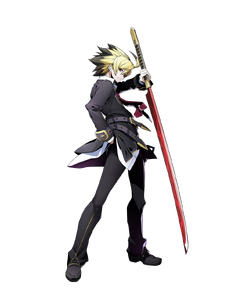 Retrieved from "https://hero.fandom.com/wiki/Hyde_(Under_Under_Night_In-Birth)?oldid=1611982"
Community content is available under CC-BY-SA unless otherwise noted.