Start a Wiki
I-58 was a Japanese B3 type cruiser submarine that served in the final year of World War II. Modified to carry Kaiten manned torpedoes, she damaged two enemy destroyers with them[dubious – discuss], but her most significant success was the USS Indianapolis, sunk with conventional torpedoes on 30 July 1945. The submarine surrendered in September 1945, and was later scuttled by the United States Navy.

The submarines share the same costume, consisting of a white and blue serafuku top with pink scarf over a classic blue school swimsuit.

I-58 herself has short light brown hair, with a peculiar hair ornament consisting of a golden clip holding two sakura petals and two ribbons who appear to be connected to her ahoge.

She's a genki girl who likes swimsuits. Her nickname is "Gouya" (58 in goroawase). Cue bitter melon puns. She also has another nickname, Dechi, based on her verbal tic of saying desu, kudasai and other similar words as dechi and kudachi. 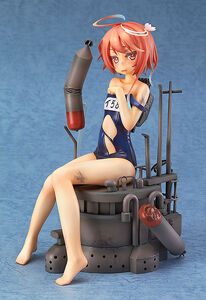 Add a photo to this gallery
Retrieved from "https://hero.fandom.com/wiki/I-58?oldid=1636573"
Community content is available under CC-BY-SA unless otherwise noted.