Escape from Isla Nublar and Isla Sorna.
Save his girlfriend and daughter from danger.
Cure the mutated locusts with Alan and Ellie's help.
Rescue Owen and Claire's adopted daughter Maisie from Biosyn.
Discover the truth about Biosyn and report it to the authorities (all succeeded).

He is a mathematician at the Santa Fe Institute who specializes in chaos theory.

He is portrayed by Jeff Goldblum, who also played David Levinson in Independence Day and Professor Brody from Cats & Dogs.

Ian Malcolm was invited to the park by Donald Gennaro as an insurance consultant as Donald apparently felt that Ian, as a fiduciary, would be able to notice any dangerous shortcomings the park had. On the helicopter ride to Isla Nublar, he met John's consults, Paleobotanist Ellie Sattler and Paleontologist Alan Grant, and travelled with them, along with John and Donald, into the park where he was stunned by the astonishing sight of a living Brachiosaurus. He then travelled to the visitor's center and learned how the dinosaurs of the park were created and watched an infant hatch. While his colleagues remained in awe of the event, Ian expressed scepticism of the Park's ability to control the animals they were breeding, and explained to his colleagues that "life finds a way".

Ian later went on the tour through the Park only to express disapproval when none of the dinosaurs showed themselves. Bored, he took to flirting with Ellie, much to Alan's chagrin, while attempting to explain chaos theory. After watching the sick Triceratops, he returns to the tour with Alan Grant, only to have it break down in front of the Tyrannosaurus rex paddock. The T. rex escapes and attacks Donald's car, which Donald had earlier abandoned with the children inside. In an attempt to lure the rex away, Ian and Alan grab and ignite flares to cause a distraction, but Ian mistakenly keeps moving after throwing his flare and is chased to the bathroom, where he is tossed several feet and injures his leg before becoming unconscious.

However, Ian was fortunate enough to be hidden from the rex's sight after being covered in leaves following the bathroom's destruction, though the same cannot be said for Donald, who ends up being devoured by the rex. Alan escapes with the kids and Ellie and Robert Muldoon arrive to help Ian, only to be set upon by the Tyrannosaurus. Having put Ian in the jeep, they escape after a short but intense chase.

Ian is brought to the control room where he helps formulate a plan to restart the power. Ian is brought to a bunker where he and John talk Ellie through the process of turning the power back on. After the systems come back online, Ian and John drive back to the visitor's center to pick up Alan, Ellie, and the kids, all of whom then drive to the helicopter, leaving the island.

After the events of the first film, Malcolm attempted to go public about his experience on Isla Nublar, only to be discredited by Hammond's nephew, Peter Ludlow, who went to great lengths to make Malcolm appear insane to the public, resulting in the revoking of his University tenure. This is further complicated by Malcolm's book being an open violation of the non-disclosure agreement he signed prior to the events of the first movie, further damaging his ruined career. By the start of the second film, Malcolm is a shell of his former self, emotionally and socially withdrawn and openly mocked in public and no longer expressing his beliefs in Chaos Theory. Despite these events, Malcolm managed to develop a relationship with an accomplished biologist named Sarah Harding, though their relationship had become strained somewhat.

Malcolm is eventually summoned to John Hammond's mansion, where an ill Hammond reveals to a shocked Malcolm the nature of Site B; a separate island where the dinosaurs were bred before being moved to the main island. Hammond then unveils his plan to send a team of researchers to the island to photograph the animals in their natural habitat in order to create public sympathy and discourage corporations, such as Ludlow's InGen, from profiting off the island. Malcolm, who is invited along, initially declines but changes his mind when Hammond reveals that Sarah was also hired and has already left for the island. Malcolm then meets up with Hammond's other men, Eddie Carr and Nick Van Owen, and makes preparations to leave for the island.

Upon arrival, the team immediately begins searching for Sarah using a satellite phone, and eventually find her following a herd of Stegosaurus. After a brief encounter with the creatures, they return to the trailer, where Malcolm finds out that his daughter, Kelly, has stowed away on board. He attempts to convince Sarah to leave with him but is interrupted when a fleet of helicopters bearing the InGen logo and carrying various automobiles arrive over the island. The team follows the new arrivals and watch as they chase down various dinosaurs in jeeps and violently capture several of the creatures. That night, they watch as Ludlow, who is in charge of the group, gives a presentation to his shareholders and announces his plan to recreate Jurassic Park in San Diego. He is interrupted however when Sarah and Nick set the captive dinosaurs loose from their cages, destroying the camp. In an attempt to avoid the chaos, Malcolm takes Kelly back to the trailer, and later, to the high-hide when Sarah and Nick arrive at the trailer with an injured infant Tyrannosaurus. However, after hearing the unmistakable bellows of the infant's parents, Malcolm leaves the safety of the hide and runs on foot back to the trailer just as the adult Tyrannosaurs arrive, and helps return the healed infant to its parents. However, the tyrannosaurs remain unimpressed and, seeing the trailer and its inhabitants as a threat, promptly push the trailer until it hovers precariously over a cliff. After barely saving Sarah from falling, Malcolm and Nick are rescued by Eddie who, in the process, is devoured by the Tyrannosaurs.

The three are then helped back onto the cliff by Roland Tembo, who is in charge of Ludlow's team. With all of InGen's equipment and automobiles destroyed, Roland decides that an uneasy alliance is the best method for escaping the island. Reunited with Kelly, Malcolm and his team agree to trek to the destroyed facility at the island's center. Along the way, Malcolm attempts to coerce Ludlow into realizing the error of his ways, but is unsuccessful. That night, the team is set upon by the tyrannosaurs, who followed the smell of the infant T.rex's blood on Sarah's jacket. The team is separated in the chaos, with most of them being chased in a massive stampede to a waterfall. Malcolm, Sarah, Kelly, and Nick end up separated from the InGen group, who are ambushed by Velociraptors in the long grass surrounding the facility. The four make it through the grass unharmed, but Ian is briefly hurt and Nick goes on ahead to call for help. Eventually Ian, Sarah, and Kelly follow, only to be attacked by three raptors. They eventually escape the compound where they board a helicopter that Nick called in, departing the island for good.

Unfortunately however, their troubles are not yet over as they eventually find that Tembo has tranquilized the buck Tyrannosaur and the team are bringing it back to the mainland. Ian and Sarah try to visit the dock where Ludlow is holding a press conference when the freighter holding the animal suddenly crashes through the dock, releasing the Rex. As the animal goes on a rampage through San Diego, Malcolm and Harding drive to the site of the new Park and retrieve the infant. They then find the father and lure him away using the infant. After a brief chase, they bring the animals back to the freighter and drop the infant in the cargo bay, where it is followed by a greedy Ludlow, as well as the adult rex, who mutilates Ludlow with the infant finishing the process of executing him. Malcolm then re-boards the ship and closes the cargo bay, locking the beast inside.

In the aftermath, Malcolm is last seen resting on his couch with Sarah, while Kelly watches a news program showing the freighter returning to the island. The public finds out that Malcolm was telling the truth and his reputation is restored.

Dr. Malcolm is mentioned by Alan Grant and Eric Kirby in a conversation. Eric disliked the book Malcolm had published, calling him "preachy" and "high on himself". Eric also states that Malcolm talked too much about chaos. Alan smiled and remarked that's two things we have in common", though his tone indicates he is not being entirely serious.

After Zara had collected Claire Dearing's nephews, she briefly read one of Malcolm's books, during their trip to the hotel. Another one of his books is seen inside the Control Room.

Ian Malcolm appears for the first time testifying before a congressional committee. He talks to the committee about whether Nublar's dinosaurs should be rescued or not, for him the dinosaurs should not be rescued because the humans have this great technology in their hands and have shown to be unable to control it.

Malcolm reappears at the end after the dinosaurs have escaped and now live in the world free, Malcolm says a new era will arrive and the humans and the dinosaurs must prepare to live together and then says "Welcome to Jurassic World." 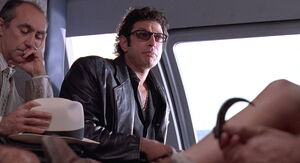 "So you two dig up dinosaurs?"-Ian Malcom's first appearance. 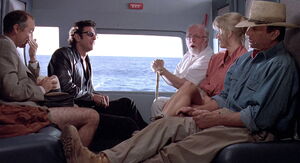 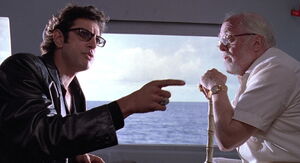 "Dr. Sattler, I believe that you aren't familiar with the concept of attraction." 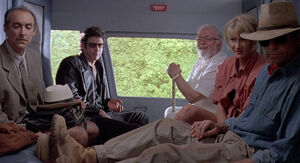 Malcom and the others arriving at Isla Nublar. 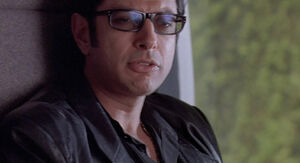 Malcom as the helicopter descends down towards the island. 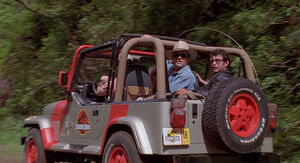 Malcom and Alan sitting in the back of a jeep. 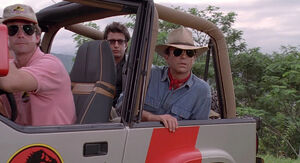 When the jeep comes to a stop, Malcom and Grant hear gigantic footsteps. 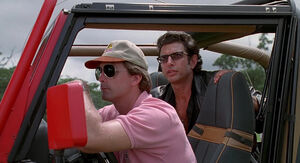 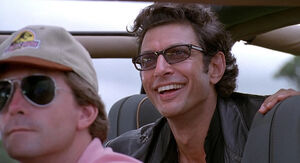 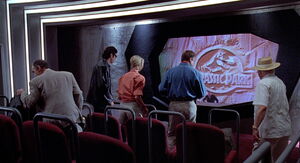 Malcom and the crew in the showcase theater. 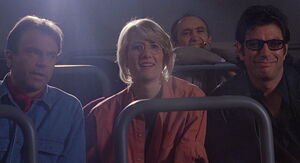 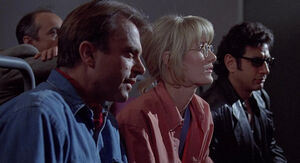 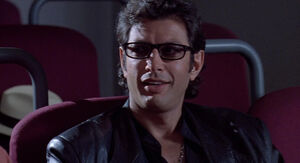 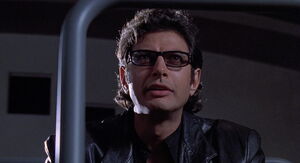 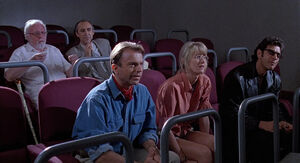 Malcom and the crew learning how Hammond used frog DNA to complete the dinosaurs' genetics. 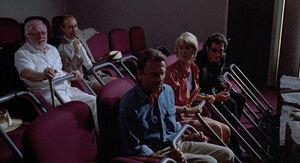 Malcom and the crew having a tour of some dinosaur exhibits. 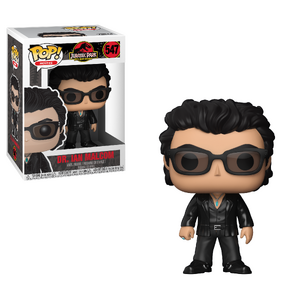