She was created by Keith Giffen, J. M. DeMatteis, and Kevin Maguire, and she first appeared in Justice League International #12 in April of 1988.

Tora Olafsdotter was born in a Norwegian Romani clan to her parents Marius (who also went by Olaf) and Elsa, and is the sister to Nikolina Olafsdotter. When Tora was young, she displayed abilities to control and manipulate ice, and Marius was desperate to hide it form the clan, fearing that Tora's grandfather would consider her the chosen one. When Tora accidently used her powers one day, her family left to Germany to escape from her grandfather, but he traveled there to take Tora by force. Marius told Tora to use her powers to stop him, and accidently killed her father, grandfather, and her grandfather's men he brought along. Tora continued running with her mother and sister until she made a deal with the government, and they moved to New Zealand for protection.

Eventually, Tora joined the Global Guardians to replace Icemaiden, and was given the codename "Icemaiden II" to be the former's successor. Tora lied about her past since she was ashamed of it, and claimed to be a Norwegian princess from an isolated tribe since most of the heroes she met came from better places than she did. The Global Guardians' funding was withdrawn by the United Nations when the Justice League was reformed to be the Justice League International, and Tora and her friend Beatriz da Costa (Green Flame) decided to join the new league. Both Tora and Green Flame managed to be recruited due to Black Canary resigning and most members being abducted, and the two decided to change their codenames from "Icemaiden" and "Green Flame" to "Ice" and "Fire".

Tora served with the newly reformed Justice League International for years, dating Guy Gardner and expressed an open crush on Superman after he joined. When Doomsday came to Earth, Ice was one of the few members of the team to still be standing, and was present when Doomsday killed Superman.

During her career, Tora was killed by Overmaster while under his mental influence, but her spirit would sometimes appear and sacrificed herself to save the Justice League from Felix Faust. Though Fire and Guy Gardner attempted to negotiate with Etrigan for her release, they failed to do so and mourned their failure. She was resurrected by Creote after being trapped in a Rocket Red exo suit, and she attacked the Birds of Prey, who saved her form an underworld figure named Kerimov. She came to senses once Huntress mentioned Gardner, and left the country with the Birds of Prey and reunited with Fire. 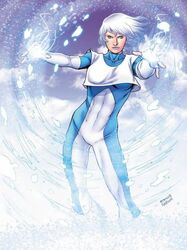