To get to the top of the mountains.

Popo and Nana, collectively known as the Ice Climbers, are a duo of mountain climbers from Nintendo's Ice Climber video game.

They are voiced by Sanae Kobayashi, who also voiced Kaede from Elfen Lied.

Nana looks similar to Popo, with the same hair color with a different hairstyle. She wears the same clothing as him, with the colors opposite; She wears pink winter-clothes and white-pink shoes. Like Popo, she has black-white-blue eyes.

Their main goal is to reach the top of the mountains while avoiding Topis and Polar Bears and collect as many vegetables as they can on the way.

In the Subspace Emissary, the Ice Climbers are first seen climbing a mountain, when they see Meta Knight fly past them, which they see as a challenge, making them angry leading to the duo racing him to the top of the mountain. When they and Meta Knight reach the top, they find Lucario there, who challenges Meta Knight to a battle. After the fight, the Halberd crashes the Great Fox into the mountain. Meta Knight and Lucario manage to board the Halberd, and the Ice Climbers are knocked back to the ground towards Marth, Lucas, the Pokémon Trainer, and Ike. After the Ice Climbers defeat some Subspace troops, they team up with the other Smashers on a journey to Subspace to defeat Tabuu. 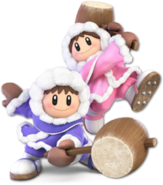 The Ice Climbers as they appear in Super Smash Bros. Ultimate. 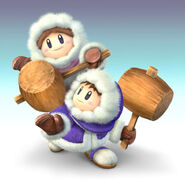