Rank VI within Organization XIII (as his nobody)
scientist

Ienzo is a supporting character in the Kingdom Hearts series. He is voiced by Akira Ishida in Japanese and Vincent Corazza in English.

Ienzo's parents passed away some time before Terra, Ventus, and Aqua arrived at Radiant Garden.

Disobeying the orders of his master to stay inside the castle, Ienzo was ultimately surrounded and attacked by Unversed until Ventus came to his rescue. Shortly after the battle, his escort Even arrived and gave Ventus both his and Ienzo's thanks, explained Ienzo's past and that he had been assigned to take care of him since the death of his parents, gave Ventus the directions to the Outer Gardens where he would find Terra, and returned to the castle with Ienzo.

As Braig is interrogating Terra-Xehanort, now known simply as Xehanort, on his state of mind, Ienzo and Ansem walk past, eating sea-salt ice cream. The pair stop and turn to see Braig and Xehanort walking away, still deep in conversation.

Ienzo was still one of six apprentices of Ansem the Wise, the ruler and scientist of Radiant Garden, alongside Braig, Dilan, Even, Aeleus, and Xehanort. Worried the Darkness in people's hearts would eventually consume his world, Ansem began performing tests on Xehanort's heart. Eventually, at Ienzo's persuasive influence, he created a laboratory in his castle's basement for such experimentation. However, Ienzo and the other apprentices had their own intentions for the laboratory, and began conducting inhumane experiments on the human heart and the darkness within it. Such experimentation led to the creation of the Heartless. Ansem quickly discovered their secret experiments, and immediately ordered them to stop. One day, after being advised to review their research data by King Mickey, Ansem found that the effects of their experiments had become irreversible.

Unknown to Ienzo, Xehanort and the other apprentices banished Ansem the Wise to the Realm of Darkness; they told him that Ansem had gone mad and abandoned them. Heartbroken, Ienzo continued to help with their research. When Xehanort's memory returned, Ienzo and his caretaker Even had their hearts removed by his Keyblade, turning them into Nobodies.

A matured Ienzo is restored to human form following the destruction of his Heartless and Zexion, awakening within the Heartless Manufactory alongside Dilan, Aeleus, Even, and Lea. The group soon discovers that Braig and Isa are missing, and Ienzo explains to Lea that a person is meant to return to human form at the world where they lost their heart, which prompts Lea to leave on a search for Braig and Isa.

Ienzo was given a Gummiphone by Chip 'N Dale to allow them communication across the worlds. He joins in the first call to Sora's Gummiphone. Seeing how confused Sora is to see him, Ienzo tells him that it's been some time since they met at the castle, mistakenly assuming like members of the first Organization that Sora has Roxas's memories. He tries to get Aeleus to talk to Sora as well, but fails. He explains that he, Aeleus and Dilan have returned to being students of the heart; when they cast off their hearts to become Nobodies, they were being deceived by Xehanort and Xemnas. However, because he mentioned them, Sora jumps to the wrong conclusion that they are still bad guys; though Goofy quickly remembers Axel is their ally now, ending the hostility. Ienzo goes on to explain that Ansem's Code has revealed that Sora's heart doesn't belong to him alone; Sora explains that it's likely due to Roxas's heart residing inside of it. Ienzo states the idea has merit as it was amazing enough Roxas could coexist with his original self; he informs Sora that they will use this hypothesis to further their research into Ansem's Code and ends his call.

Shortly afterward, Ienzo gets an alert on the computer that says someone is trying to log on using a different computer. He gives Sora a call, learning about the lab Ansem the Wise has in Twilight Town. After helping Pence set up a link to his computer in Radiant Garden, Ienzo begins working to collect the data on Roxas from the other Twilight Town to begin reconstructing his heart.

King Mickey and Riku later visit him to ask about the possibility of using replicas as vessels for the hearts of Roxas and Naminé. Ienzo explains that Even is the only one who would have in-depth knowledge of how to create replicas from his time as Vexen; however, he's vanished, with Aeleus and Dilan having no luck finding him. Any documents they have are from well before he made significant progress. Riku immediately guesses that the new Organization may have taken him to use the replicas to fill out their ranks.

Ienzo later calls Sora, revealing the part of Ansem's Code that they've managed to decipher. Ansem the Wise had discovered that not only does Roxas's heart reside within Sora's heart, but two more hearts as well; having just met Vanitas at Monstropolis, Sora knows one is Ventus, but remains clueless about the identity of the third heart.

Despite the progress in reconstructing Roxas's heart from the Twilight Town data, Ienzo is stumped on how to progress any further as without a vessel to place the data in, they are at a standstill. At that moment, Demyx arrives from a dark corridor, carrying something wrapped in a sheet, As Vexen had recruited him to help him and Saïx in their plot for atonement. Ienzo is surprised to see his old comrade from the Organization, who informs him that he's on a top secret special mission; since Demyx is so far off everyone's radar, he can make a very special delivery. To Ienzo's shock, his master Ansem the Wise emerges from the dark corridor. Overwhelmed with emotion, Ienzo tells Ansem that the other apprentices withheld the truth about banishing him to the Realm of Darkness and instead told him that he had gone mad and abandoned them; since he was a child, he believed them easily. He apologizes with all his heart, only to be comforted by Ansem, who tells him that so long as he recognizes his mistake, they can move forward. Demyx interrupts them to reveal that Vexen had given him a blank replica for their use.

Ienzo places Roxas's data inside the replica and sends it to the Keyblade Graveyard mere moments before Xemnas can attempt to kill Xion and Lea, where his heart reacts with the connection in Sora, fully restoring him to life. He is last seen with a revived Even and Ansem the Wise as they use another vessel brought to them by Demyx to full restore Naminé. 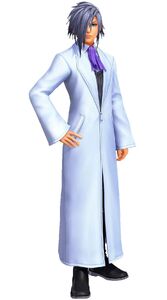 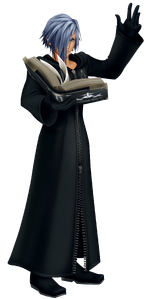