Canine leader of his own pack (formerly)

Its Stand has ability to manipulate sands

Wander off and do its own things alone.

Defeat DIO and resume its life as a leader of its pack.

Iggy is a small black and white dog whose original appearance is modeled after that of a Boston Terrier. His paws, stomach, chest and neck are white, as are the area around his mouth and his forehead. His eyes bulge slightly, and he has loose jowls. During his fight with Pet Shop, Iggy shrinks significantly, and his face becomes more cartoonishly human, with a large forehead, a small mouth and larger ears. His eyes also become much larger and more expressive.

Iggy is initially described as a particularly antisocial dog. His favorite treat is coffee-flavored chewing gum. He also enjoys chewing on human hair and farting in human faces. To begin with, he antagonizes Jean Pierre Polnareff most of all. Iggy values his independence, and he has a high opinion of himself, thinking himself and his Stand stronger than Jotaro and Star Platinum. Iggy rises to the challenge of his fights with Pet Shop and Vanilla Ice and shows profound bravery.

Iggy's The Fool is a highly versatile Stand composed of sand, the mass of which Iggy can throw with great force or use to construct strong, intricate and variable shapes.

Iggy was found by Muhammad Avdol in the street slums of New York acting as the king of the stray dogs. Only Avdol was able to come close to him, as ordinary dog catchers were attacked by his Stand.

Iggy came to the scene aboard a Speedwagon-sponsored helicopter in the middle of the desert, brought by the Speedwagon Foundation to help in the battle against DIO. Polnareff, being cocky and intrigued about their new partner, becomes the target of the ferocity that Iggy is infamous for, after disturbing his slumber. The pilots and Avdol were only able to control him because of one unlikely treat: a coffee-flavored chewing gum. Because of how he attacked Polnareff, everyone, especially Jotaro, had doubts about the suitability of Iggy's companionship. Iggy also didn't want to take part in a battle that had nothing to do with him. Their questioning grew deeper when they were attacked by N'Doul in the middle of the desert. Iggy ran from the battle, showing his cowardice and lack of intention to help. They misinterpreted Iggy's pursuit of N'Doul's trail for cowardice. Jotaro grasps Iggy in his hand, forcing Iggy to cooperate before N'Doul's Geb attacked them both. Left with no choice, Iggy took Jotaro to the enemy, but in the middle of their pursuit, Iggy decided to leave Jotaro behind to be killed alone. Jotaro then threw Iggy at N'Doul, distracting the enemy enough and leading him to his eventual defeat. Jotaro ends up forgiving Iggy, saying he too wouldn't like to be dragged in a war he had nothing to do with himself. Iggy decided to accompany the group and earned their trust, even though Polnareff still believed he would run away in the end. 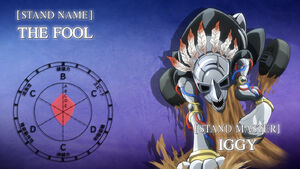 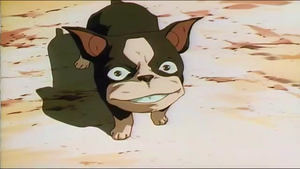 Iggy in the OVA 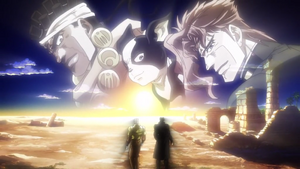 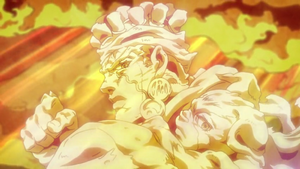 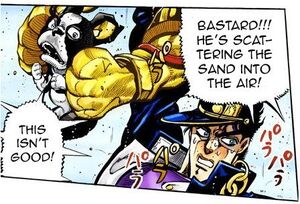 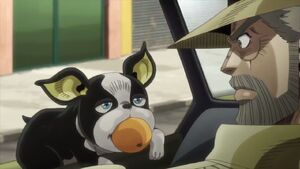 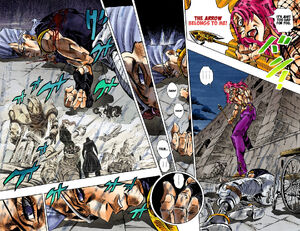 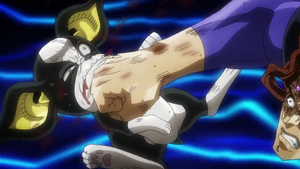 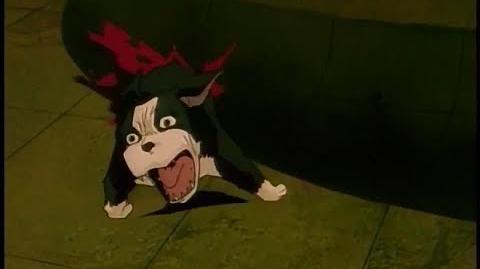 Retrieved from "https://hero.fandom.com/wiki/Iggy_(JoJo%27s_Bizarre_Adventure)?oldid=1797951"
Community content is available under CC-BY-SA unless otherwise noted.