Ignitor is a fire knight in Skylanders: Spyro's Adventure.

He is voiced by Dwight Schultz who also did the voice of Mung Daal from Chowder and many others.

When first he encountered the red dragon, Ignatius was a young knight with squeaky armour and a rusty sword. On his way to slay the beast, he met a witch who presented him with a special (and handy) gift - a magical suit of armour offering protection from dragon breath. But a nasty surprise was waiting for Ignatius at the dragon's lair. The monster rained its fiery breath over the knight's poor head, settling him on fire. Ignatius had been tricked! His new suit was made from a cursed steel that bound itself to him, trapping him inside where he would forever remain a fire spirit. But all was not lost. He defeated the dragon and became a Skylander. Now named Ignitor, he has since embraced his fiery talents and keeps a vengeful lookout for witches everywhere. 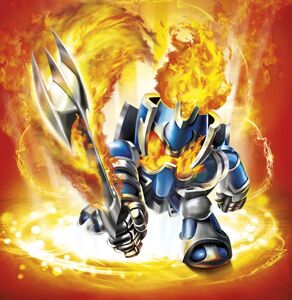 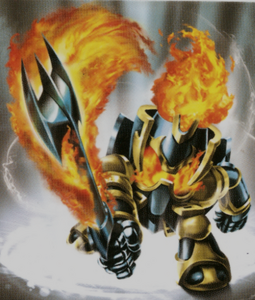