To invade humankind (gave up), enjoy the life supply of shrimps and fight the pollution (in action)

Ika Musume or Squid Girl in the English dub is the titular character and main protagonist of Shinryaku! Ika Musume. Ika Musume came from her home in the ocean to invade humanity and targeted the Lemon Beach house owned by the Aizwa siblings. Instead she was forced to work as a waitress to pay for the hole in the wall she created.

Ika Musume came to invade the surface in her attempt to teach humanity a lesson for polluting the ocean. She eventually became friends with Eiko, Chizuru and Takeru Aizawa and to some other people in the beach community. She stays and sleeps with the Aizawas.

Ika Musume is basically a squid girl having controllable and powerful tentacles as her hair and having more squid based abilities such as the ability to spit squid ink and glow like a firefly squid. She can also control her weight with her bracelet without changing her physical appearance and she can become too light so that she can fly. She is also a fast learner and a genius, learning Japanese and English at the same time and is adept at many different fields such as advanced math and art. She often brags about how she is better than humanity by demonstrating these skills. She is also clueless of the social norms which is expected to someone who came from the ocean. She is self-proclaimed messenger of the sea and vows to protect her home. She also have a craving for shrimps.

Ika Musume appears as a human, but her hair is actually 10 blue squid tentacles. These tentacles can regenerate upon being removed from their place. She also has a hat, but for some reason, knocking it off or forcing her to take it off is fatal, and when it is about to be taken or knocked off, she gets scared.

Ika Musume/Squid Girl is voiced by Hisako Kanemoto in the original Japanese version and Christine Marie Cabanos in the English version, the latter whom also voices Madoka Kaname of Puella Magi Madoka Magica, Nepgear of Hyperdimension Neptunia and Shiemi Moriyama of Blue Exorcist. 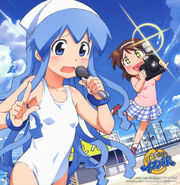 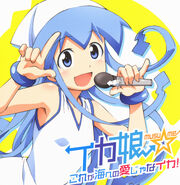 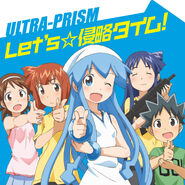 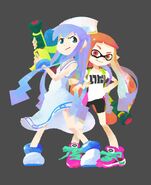 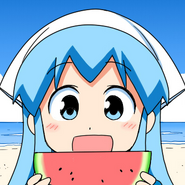 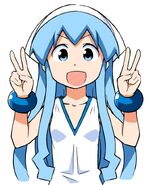 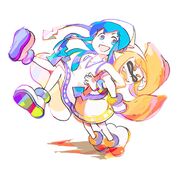 Retrieved from "https://hero.fandom.com/wiki/Ika_Musume?oldid=2167131"
Community content is available under CC-BY-SA unless otherwise noted.