NOTE: This article is about the incarnation of Ikaris from the Marvel Cinematic film series. The mainstream version can be found here: Ikaris (Marvel).

Member of the Eternals

Being with Sersi (formerly).
Hang out with his fellow Eternals.

Marry Sersi.
Stop Ajak from preventing the Emergence (both succeeded).
Continue to extinguish Deviants in different planets to create a new Emergence.
Make it sure Earth's Emergence works out (both failed and later abandoned).
Help Sersi kill Tiamut (succeeded)

Ikaris is the main antagonist of the 2021 Marvel Cinematic Universe film Eternals.

He is the ex-husband to Sersi, who is the tactical leader of community genetically-engineered Eternals that is devoted to protecting mankind from the Deviants. It's later revealed that Ikaris caused the death of Ajak when she refused to start the emergence, leading to him to fight against his former allies. He would decide to join the Uni-Mind to kill Tiamut when remembering his past memories with Sersi, and a guilt ridden Ikaris seemingly commits suicide by flying into the sun once the emergence is averted.

He was portrayed by Richard Madden, who also played Robb Stark in Game of Thrones and Prince Kit Charming in Cinderella, and voiced Alucard in the Castlevania: Lords of Shadow series.

Ikaris was created by Arishem the Judge as a synthetic lifeform being with the purpose of getting rid of the Deviants, also being created to kill predators in other planets, so intelligent beings in those planets wouldn't be killed by them, and then could serve as fuel to the Celestials that were going to be born in the center of these planets, in an event known as Emergence, in which entire galaxies would be created with the new Celestial's help, creating a death and life cycle.

He and the other beings with the same mission of Ikaris were called the Eternals, as they were immortal and appeared similar to human beings. Ikaris, along with Ajak, were the only two among their group of Eternals that retrieved their memories after each Emergence, while the other members did not remember and thought that their mission was to kill Deviants so intelligent life could evolve, not knowing that it would be sacrificed to a new Celestial to be born.

Ikaris and the Eternals would be sent to Earth in 5000 BC to stop the Deviants from harming civilization, and Ikaris was the first to fight and later introduced himself to Sersi. As centuries passed, Ikaris became close and married Sersi, but didn't reveal the truth of the Eternals' creation. He also became good friends with Sprite, who would make up the tale of Icarus, The Boy Who Flew Too Close to the Sun, while they were in Athens. In the 1500s, Ikaris and the Eternals defeated the presumed last of the Deviants, and Ajak tasked them to go their separate ways to live with humanity. Though Ikaris decided to live with Sersi, he would end their marriage due to suffering from a moral dilemma from knowing of their true purpose.

When the titan Thanos succeeded in obtaining the Infinity Stones, he caused the decimation, which resulted in the delay of Earth's emergence. When the snap was undone by the Avengers in 2023, Ikaris met with Ajak, who revealed that she was planning to prevent the emergence after gaining compassion for humanity. Though shocked, Ikaris decided to lie that he agreed with Ajak, and sent her into a trap where the Deviant Kro took her power. He succeeded in preventing Ajak's goal, but felt immense regret after burying her body in South Dakota.

Despite his regret, Ikaris decided to find the rest of the Eternals to unite them to kill the rest of the Deviants, which could end their true mission. Traveling to England, Ikaris reunited with Sersi and Sprite by defending them from Kro and took them to South Dakota to find Ajak's corpse. After managing to convince Kingo to leave his set, the group traveled to Australia to find Thena and Gilgamesh. Once they agreed to rejoin, the Eternals went to the Amazon Rainforest to reunite with Druig, who left the group centuries prior to start his own community. When explaining recent events, the Deviants arrived and Kro managed to kill Gilgamesh, who had rescued Ikaris from the empowered being. Ikaris mourned the loss of Gilgamesh with the group, but felt some aggravation from the Eternals losing direction in completing their mission.

When Druig admits that he isn't strong enough to affect a Celestial, the Eternals decide to find Phastos, who had previously given up on humanity after helping them gain the skill to create weapons like the atomic bomb. With the remaining Eternals together, they traveled to Iraq and find the Domo, where Makkari has resided. When the group want to use their powers to form a Uni-Mind to stop the emergence, Ikaris shows hesitance, leading to Druig and Sersi to learn the truth. Ikaris attempts to explain that it was their duty to make sure the Celestials' life cycle continue, and briefly battles his former allies alongside Sprite, who believes that the emergence will allow her to grow into an adult.

Despite reaching Sersi to prevent her from stopping the emergence, he decides not to due to recalling his past memories of their time together. He and Sprite then proceed to surrender, and unite their power to Sersi with the others to help her kill Tiamut, thus averting the emergence. Afterward, Ikaris apologized Sersi for his actions, and seemingly committed suicide by flying directly into the sun.

Ikaris was a loyal soldier who took pride in following orders. However, he was totally dedicated to the Celestial’s mission, even going as far as to kill Ajak, and later threatening and fighting his fellow Eternals should they interfere with Tiamat the Communicator’s Emergence. This dedication though was not absolute since his love for Sersi took precedence in the last moment before Ikaris could attack her. When he had the chance to stop Sersi from forming the Uni-Mind, he chose not to do so and even joined the other Eternals into the Uni-Mind. Afterwards, Ikaris felt deep guilt over what he had done in killing Ajak and betraying his fellow Eternals, causing him to be intensely conflicted between his love, his guilt and his loyalty to the Celestials, leading him to fly out of the Earth’s atmosphere and seemingly commit suicide by flying towards the Sun. 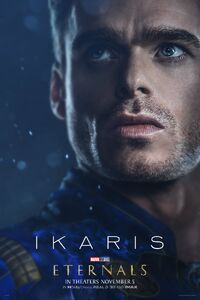 Ikaris flying into the sun to his presumed death.