Ikazuchi (雷 "Thunder"?) was the twenty-third Fubuki-class destroyer, or the third Akatsuki-class destroyer (if that sub-class is regarded as a separate class), built for the Imperial Japanese Navy in the inter-war period. When introduced into service, these ships were the most powerful destroyers in the world. They remained formidable weapons systems well into the Pacific War. Ikazuchi, built at the Uraga Dock Company was the third of the “Type III” improved series of Fubuki destroyers, incorporating a modified gun turret which could elevate her main battery of Type 3 127 mm 50 caliber naval guns to 75° as opposed to the original 40°, thus permitting the guns to be used as dual purpose guns against aircraft. Ikazuchi was laid down on March 7, 1930, launched on October 22, 1931 and commissioned on August 15, 1932.

The Akatsuki-class wears a white and dark blue serafuku with a "III" somewhere on themselves as well as some form of black legwear.

Ikazuchi herself has short brown hair and pantyhose. The "III" is on the right side of her collar.

She'a an excited girl, she is sometimes shown with her sister ship Inazuma. She is also often depicted as very doting to the admiral. 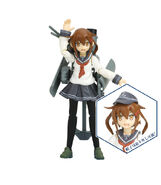 Add a photo to this gallery
Retrieved from "https://hero.fandom.com/wiki/Ikazuchi?oldid=1835697"
Community content is available under CC-BY-SA unless otherwise noted.