Leader of the Greil Mercenaries

He is the first and only main character not of noble birth in the Fire Emblem series. He is the fearless leader of the Greil Mercenaries. He is a kind and brave character, and is very protective of his friends and family. His motivation is to avenge his father's death, but he seeks no reward in aiding Crimea's liberation and helping Elincia to claim the throne as queen, except for the usual payment as being a mercenary. Although he has no desire to become a noble, he accepts the title as Lord so he can lead the Crimea Liberation Army after his triumph over Duke Oliver. He is a good swordman. In the story of Path of Radiance, Ike is the first and only character to break the tradition of a Fire Emblem protagonist being a noble or prince. He is a mercenary along with several others in a group under the command of his father, Greil. Ike and the Greil Mercenaries must protect and escort the princess of the soon-to-be-besieged country of Crimea, Elincia, to the continent of Tellius, previously wrecked by conflict and animosity between humans and transformable demi-humans. Eventually, Elincia formally bestows the Lord rank to Ike so that he can lead the armies of Crimea and the theocracy of Begnion into battle against Daein, and after finding the willpower to wield the sacred blade Ragnell, he takes the fight to Daein's officers in their homeland, and clashes against the Black Knight wielding the dark sword Alondite. The finale sees Ike finally battling and defeating Daein's megalomaniac wyvern-riding king, Ashnard; with this accomplished, the continent is saved from utter destruction and Beorc-Laguz relations become more positive, and Ike is content with reverting back to the life of a mercenary. He is then considered a true sword master.

Ike is not mentioned a lot in Awakening; various references such as the Ragnell (now pale and cracked, including breakable) can be found via event tile or at the Barracks at random. A man named Priam mentions he is a descendant of the Radiant Hero, and Owain calls out the title of the ninth Fire Emblem game as a move.

Ike also appears as a SpotPass character and a DLC character. Throughout the Einherjar saga (as it is generally dubbed) Ike fights for or against the Shepherds, starting with Champions of Yore 1 as an ally and thereafter as an enemy until Smash Brethren 2 against the army of Elibe. Finally Ike can be recruited upon beating the final Einherjar xenologue Rogues & Redeemers 3.

Ike appeared in Nintendo's fighting game series Super Smash Bros., his first appearance in the series being the third installment, Brawl. As a fighter, Ike is a slow, heavy fighter with powerful attacks. He also appears as a two stickers, one based in his aparition in Path or Radiance who increase the weapon attack of Marth and he, and the other based in his aparition in Radiant Dawn who increase the slash attacks of Marth and he. Ike made a reappearance in Super Smash Bros. 4. Instead of using his Ranger outfit from Path of Radiance he now uses his Hero design from Radiant Dawn while retaining his Brawl moveset. There was a debate about whether Chrom would replace Ike for the fourth game but ultimately, Ike was kept while Chrom was cut out of fear for "not bringing anything new".

Ike in the Subspace Emissary 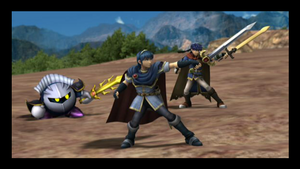 Ike with Marth and Meta Knight in the Subspace Emissary 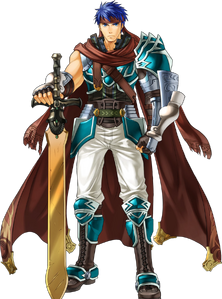 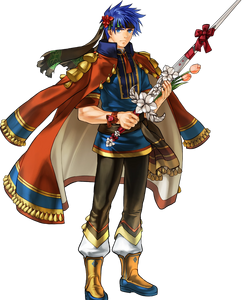 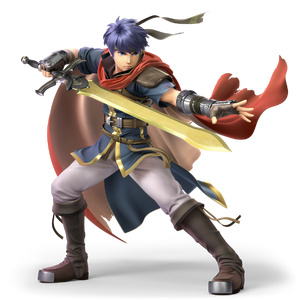 Ike as he appears in Super Smash Bros. Ultimate. 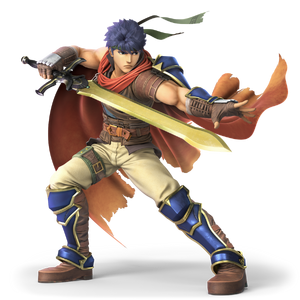 Ike in his Radiant Dawn look in Super Smash Bros. Ultimate.
Add a photo to this gallery

Retrieved from "https://hero.fandom.com/wiki/Ike_(Fire_Emblem)?oldid=1856170"
Community content is available under CC-BY-SA unless otherwise noted.