Protect Ryloth and save the Twi'leks (posthumously succeeded)

Ima-Gun Di is a Jedi Master and a hero in the Star Wars series.

His name is pronounced "I'ma gon' die", reflective of the fact he dies in the first episode he appears in.

During the Separatist blockade of Ryloth, the Twi'leks fought against the droid army with freedom fighter Cham Syndulla and Jedi Master Ima-Gun Di helping. The battle was long and hard and medical supplies were running low. Master Di tried to make contact with the Jedi Temple to ask for assistance but the blockade destroyed the orbiting Jedi Cruiser. Master Yoda made contact with Alderaan senator Bail Organa to send help but it would arrive too late.

Cham Syndulla abandoned the fight to make sure his people made to safety while Master Di and his clone troopers hold off the droid army. Master Di plants explosives in a gunship and destroys it and blocked a strategic mountain pass, which gave Syndulla's fighters time to escape the Separatist forces.

Di and Captain Keeli held off the battle droids the best they could. As the clone troopers fell Di and Keeli remained only for Keeli to fall. Outnumbered, Master Di fought with all his strength but was shot several times. Before dying, Di saw the supply ships fly past him and knew the Twi'leks would live to fight another day and Di was shot down by battle droids, ending his life. 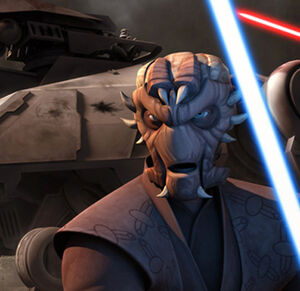