Member of the Nameless Army

Destroy Maximilian, Salvaria and the Empire,

Get back to her world (Project X Zone)

Imca, also known as "Ace Number 1", is a Darcsen Heavy Weapon specialist whose village was destroyed by the Valkyria. She joins The Nameless to seek revenge against the Valkyria responsible. She has a difficult relationship with Riela due to the latter's heritage. She has romantic feelings for Kurt. She also makes an appearance in the crossover, Project X Zone.

Imca was born within a small village in Imperial territory called Tiluca, close to the Gallian border. After her home was lost to the attack of a Valkyria, she began a solitary journey, believing in self-reliance above all else. She devoted herself to training her body and mind, as well as a continual process of upgrades and modifications to her personally-designed weapon, Var. In teaching herself about the world around her through experience she has extensive knowledge about both nature and combat, but tends to oversimplify things at times. This extends to her hate of mushrooms, which she believes are all poisonous to the point where even looking at one is disagreeable to her. After a time she crossed into Gallia, and was later placed in the Nameless by Ramsey Crowe. At the beginning of Valkyria Chronicles 3: Unrecorded Chronicles, Imca is the longest-serving member among the Nameless.

Imca makes an appearance in Project X Zone as a Solo character alongside Kurt and Riela. She uses her Var in battle. She is recruited in Chapter 17: Operation 'Crackdown

A member of Nameless. Says little and rarely shows any emotion. Uses a giant weapon called Var, of her own construction, and is known as the "Ace" or "No.01" of the unit due to her extremely effective use of it in battle.

She lives only to take revenge on the Valkyria responsible for wiping out her home village of Tilca. This meant that she initially she wanted nothing to do with the others in the unit, or with battle strategies, but after Kurt promised to aid her revenge in exchange for her cooperation, she began to take orders and adapt to being a member of Nameless.

Her difficult past has left her a bit of a strange eater, and with a severe dislike of the cold. 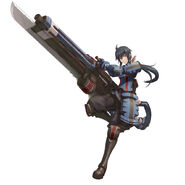