Destroy Diablo and The Demonic Legion

The Archangel Imperius is a member of the ruling Angiris Council and a hero in Diablo III. He's also the main hero in a animated short film, Diablo III: Wrath.

He is voiced by Rick Wasserman.

He is the Archangel of Valor, and is even said in the Book of Cain to be the commander of the Heavenly Host and the leader of the Council, at least since the departure of Malthael. While his methods are exact and severe, and he personally holds contempt for Humans, there is no greater defender of good, and he is the greatest warrior in all of creation.

Imperius's tactical brilliance encompasses all facets of warfare, from maneuvering armies on the battlefield to leading covert strikes against Hell's outposts. The mere sight of Imperius is enough to embolden angels with valor and strength. His valor is so firm that he can withstand terrors of his archenemy Diablo, even those that no other angel can.

However, Imperius's valor has come with the flaws of pride and arrogance, and when enraged, he may become reckless beyond reason. He has had many arguments with Tyrael that could only be put to rest through Auriel's intervention. When not in battle, Imperius often strategizes and trains other warrior angels in the Halls of Valor, his personal domain in the High Heavens. He possesses a strong hatred of humanity — Diablo's assault on Heaven has only added to that hatred, both because it was only made possible by Leah and because the Nephalem succeeded in defeating Diablo where he himself has failed. Myriam Jahzia also foresaw that his hatred for the Nephalem will grow even stronger after Malthael was defeated by their hand.

Imperius and Diablo appear to be archenemy's as Diablo is the Lord of Terror, the opposite of Valor. Imperius even calls Diablo his "old enemy" durring his siege of Heaven.

Imperius's abilities include teleportation, the ability to render other angels silent with a mere gesture and telekinesis. Solarion, his spear, can be called to his side at a moment's notice.

Over the aeons of the Great Conflict, Imperius tread where other angels did not dare. When the war turned in Heaven's favor, he was always the first to spearhead the most daring assaults into the Burning Hells. When Hell's legions lay siege to the High Heavens, it was Imperius who rallied his fellow angels to action, always the first to storm out of the Diamond Gates and charge headlong into the scattering armies of Hell. It is written that in one of Imperius's invasions of Hell, Solarion (his spear, forged by Imperius in the heart of a dying star) felled so many demons that rivers of blood flowed throughout the seven realms of the Great Evils.

On one such battlefield, Imperius and all four other Angiris Council members took the fight to their demonic foes. Imperius bested a gigantic one-eyed demon by himself, and the demons retreated to their fortress. Imperius sent the Heavenly Host after them. Tyrael urged caution, but Imperius ignored him and entered the fortress himself. Arriving in the structure's depths, he found his fellow angels dead, and Diablo, Lord of Terror, waiting for him. The two came to blows, fighting each other to a standstill as Diablo commented of Imperius's rage while in battle and wondered aloud if his enemy feared of how the angels saw him of what he truly was. Imperius responded that he feared nothing and continued fighting. It was at this point that the other Angiris Council members arrived, imprisoning the Prime Evil. Auriel and Tyrael suggested capturing him, for if slain, Diablo would return in time. An enraged Imperius however, declared that demonkind could only be dealt with through blood, and slew the Lord of Terror. It was an act that Auriel declared "sacrilege" and Diablo mocked the angels with his last breaths. Nonetheless, Imperius's actions would later be immortalized in the Tristram Cathedral.

Imperius was present at the Pandemonium Fortress when Iskatu, a demon in service to Diablo, led an assault on the fortress. Iskatu wore the Pandemonium Loop, a ring given to him by Diablo that sowed fear amongst the angels defending the fortress. Imperius was unaffected by the loop however, and hacked off Iskatu's arm. Iskatu fled the field of battle, and the ring was lost.

The Great Conflict came to a sudden halt with the disappearance of the Worldstone. It was eventually discovered that it had been stolen by renegade angels and demons led by the archangel Inarius, and that they had used it to create an entire world—Sanctuary. The renegades had even coupled with each other to create a new race—nephalem, and their descendants, humanity. Upon the discovery of this world and its people, the forces of the High Heavens (intent on eradicating the "abominations" they beheld), Burning Hells, and Edyrem met in battle, that was only ended through the sacrifice of the nephalem Uldyssian.

Thus, the Angiris Council met to reconsider the fate of Sanctuary and its people. Imperius reaffirmed his belief that the "demonspawn" be eradicated, while Auriel and Itherael voted that humanity be spared. Malthael cast no vote, so all eyes turned to Tyrael. Imperius expected that he would vote for humanity's annihilation, and in the event of a tie, the Angiris Council would carry out its original intent on scouring humanity from existence. Tyrael, much to Imperius's surprise (and resentment), sided with humanity. Imperius, though irritated by how events had gone, nonetheless agreed to honor the council's judgement. And in return for Inarius, he made a pact with the demon lord Mephisto that Sanctuary and its inhabitants be free to choose their own path.

The millennia following the Sin War were not kind to Imperius. With the pact made between Heaven and Hell, the Great Conflict was brought to a grinding halt, thus robbing Imperius of further opportunities to prove his valor in combat. The rift that Tyrael's actions had caused between them refused to close, and since that time, it is said that Imperius became a highly legalistic and unbending tyrant. Deckard Cain speculated that it was not his intent, but nonetheless, Imperius's actions caused disharmony to creep into the Angiris Council. With the departure of Malthael after the destruction of the Worldstone, Imperius became the council's de facto leader.

Twenty years after that event, events between Imperius and Tyrael came to a head, as he demanded that Tyrael account for his interference in the human world. The two traded blows, first verbal, then physical, until Tyrael had Imperius at the tip of his own spear. Refusing to bow to Imperius's mandates, the archangel ripped off his own wings and became human, in an act that Imperius declared to be sacrilege. Subsequently, Tyrael fell upon Sanctuary, cast out from Heaven.

Not long after Tyrael's departure, Imperius found himself looking out from Heaven, to see Diablo before him, possessing the body of Leah. Not fooled by the disguise, Imperius unleashed Solarion upon the Lord of Terror, revealing Diablo's true form. A form that was nothing like what Imperius had seen in the past, but something else entirely. A singular Prime Evil, with the essences of all seven Great Evils in the one body. Outmatched, it was not long before Solarion had been split in two, and Imperius himself impaled. Despite his wound, Imperius managed to teleport away. What he couldn't do, was prevent Diablo from destroying the Diamond Gates, giving entry to both himself and the forces of Hell also.

Despite his wound, Imperius nonetheless attempted to rally the angels to defend their home. As things turned out, Tyrael and Nephalem allies had followed Diablo and met Imperius in the Silver City. Imperius blamed Tyrael and the Nephalem for Diablo's invasion, and ignored Tyrael's insistence that, wounded as he was, he could not face Diablo again. He headed off, warning the nephalem to be gone from his sight.

At the Crystal Colonnade, Imperius encountered the Nephalem again. After destroying several demons, he warned them to leave (again). Itherael and Auriel dissuaded him somewhat, but Imperius nevertheless threatened to kill the Nephalem should he see them again. And at the base of the Crystal Arch, Imperius and a group of fellow angels threatened to do just that, along with Imperius vowing to deal with Tyrael as well. However, the angels were too late to carry out his threat; by this stage, Diablo had begun to corrupt the arch, and a wave of energy incapacitated Imperius and his fellow angels. Tyrael and the Nephalem were unaffected, however, and were able to defeat Diablo and save all of Creation from Diablo's wrath. 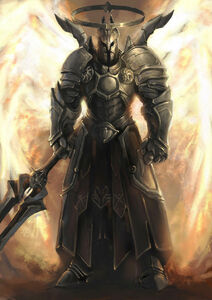 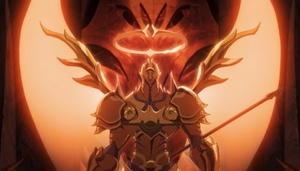 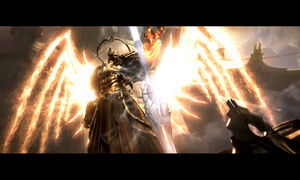 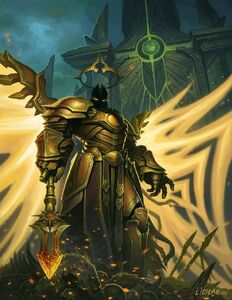 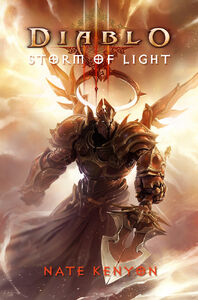 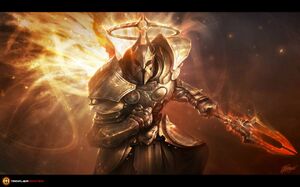 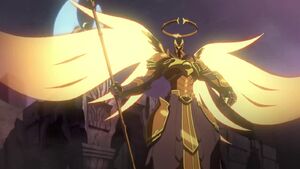 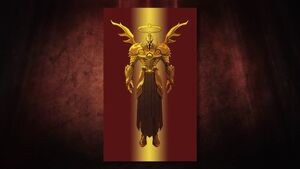 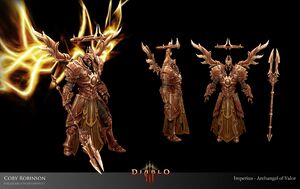 Retrieved from "https://hero.fandom.com/wiki/Imperius?oldid=2320406"
Community content is available under CC-BY-SA unless otherwise noted.