Depends on the individual

Incineroar is a Fire/Dark-type Pokémon introduced in Generation VII that is the final evolved form of Litten.

Incineroar is a bipedal, feline Pokémon with a muscular build. It has a short snout with a small red nose, bright green eyes with yellow sclerae, and tiny, pointed ears. Large tufts of red fur extend from its cheeks, and much of its face is also red. The upper half of its muzzle and the top and back of its head are black. A thin red stripe runs vertically along its head to its snout, where it splits into a V-shape over its eyes. Its torso is gray with several black stripes and seems to resemble a wrestler tank-top; the front and back both have a single vertical stripe up the center, crossed by two horizontal lines. Around Incineroar's waist is a belt formed from flames that somewhat resembles a championship wrestling belt. In the front center is a small, yellow flame shape. The arms, legs, and tail are all red with black stripes forming bands around them. The arms have three stripes, spiky tufts of black fur over the shoulders, and large five-fingered hands with white claws and a single light red pad on the palm. Its legs have only two stripes and simple three-toed paws, and the tail has one stripe and a tuft of spiky black fur around the tip.

Incineroar is a violent, aggressive Pokémon known for its brutal prowess in battle. It is known to be indifferent and arrogant, even refusing to battle weak or injured foes, though it is said Incineroar deep down loves praise and attention and plays its antagonistic "heel" impression for show.

Incineroar's flame belt is produced from within its body and burst from its navel and waist as its fighting spirit rises. This Pokémon disregards the safety of its opponents and on-lookers, sometimes striking the opposing Trainer with attacks.

Incineroar is the only known Pokémon capable of learning the move Darkest Lariat and the exclusive Z-Move Malicious Moonsault. 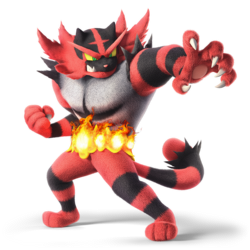 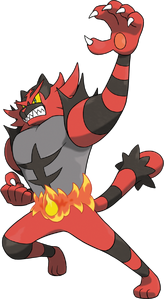 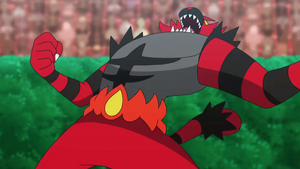 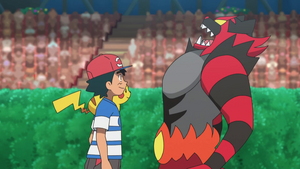 Ash and his Incineroar.